Ace Carroway and the Midnight Scream 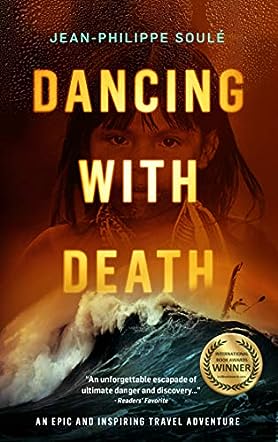 Since a young age, I was always drawn to adventure, active discovery, and dreaming of far-flung places.

CASKE2000 was my most epic expedition to date. A three-and-a-half-year adventure, that took me, my travel partner and our sea kayaks from the wild Baja California coast all the way to indigenous territories in Panama. A journey of resilience and rare encounters, for me to share and document the life of Latin America's indigenous people.

CASKE2000 was an undertaking that had never before been attempted. It's an achievement that remains intact to this very day, and the bar was set for all adventurers that would follow.

Lucky to have survived this adventure, we're here to share that story. From the curious why of our expedition to how we took that dream and turned it into a stark reality.

"Dancing With Death" will take you on the ride of a lifetime. A rollercoaster of resilience, rare encounters, and moments that will leave you on the edge of your seat; it's a fascinating account of adventure, passion, and an insight into our very own lives.

I'd like to invite you to be part of this grand voyage by reading Dancing With Death.

Dancing With Death is billed as ‘An Epic and Inspiring Travel Adventure.’ It is most certainly that. The dancing with death element, however, seems to be due in equal parts to the bold adventurism of its co-authors, Jean-Philippe Soulé and Luke Shullenberger, and their often naïve, some might say foolish, risks of unpreparedness. But these two travel partners are quite candid about their foibles (like an obsessive phobia about man-eating crocodiles), as well as their sometimes friction-filled moments resulting from fatigue and basic personality differences. So the fruit of their disparate but complementary perceptions is a deeply engaging, truly mesmerizing account of ocean-going survival and contact with indigenous jungle tribes inhabiting the southern world, all part of the “Central American Sea Kayak Expedition 2000 (CASKE 2000), a three-year, 3000-mile paddle across seven countries from Baja California to Panama, alternating between the Atlantic and Pacific coasts” – brainchild of Jean-Philippe.

"We chose sea kayaking as a low-impact way to penetrate untouched jungles and their inhabitants without disturbing them. We won’t meet indigenous people as high-tech tourists, but as people like them, living from the land and sea." This admirable and ambitious decision by Jean-Philippe Soulé and Luke Shullenberger lends David and Goliath drama to the epic tale of adventure related throughout Dancing With Death – not, in fact, a hyperbolic title. Told as a recreated narrative by Jean-Philippe, but also spiced with present moment vividness from journal entries made at the time (including many enticing photographs and ecological observations), these two ambitious souls take the reader on an unforgettable escapade of ultimate danger and discovery, inspiring less intrepid souls with displays of eclectic survival traits - like athleticism, boldness, ravenous curiosity, and endless buckets of uncanny luck. Even when confronting crocodiles.

Dancing With Death really is An Epic and Inspiring Travel Adventure by Jean-Philippe Soulé. Jean-Philippe and Luke Schullenberger have been preparing for this journey for a long time. CASKE 2000, or the Central American Sea Kayak Expedition 2000, is a journey like no other, starting in Baja, California and ending three years later in Panama. It’s a tough expedition and the two travelers face every threat imaginable – bandits, crocs, sharks, malaria and the roughest of weather as they search for local natives everywhere they go and learn their ways, how they rely on and use Mother Nature to their advantage. This is a journey of dreams, sacrifice, endurance and triumph, a journey of life that takes you to places you could only ever dream of, through three years of heaven and hell on earth.

Wow! Dancing With Death: An Epic and Inspiring Travel Adventure by Jean-Philippe Soulé is one of the most amazing travel and adventure books I have ever had the privilege to read. What an adventure! It kind of made me want to pack my bags and head off into the unknown myself. This is far more than a travel guide, far more than survival; this is a real story of two brave adventurers who left everything behind to experience the world in an unusual way. We see the journey through their eyes, experience their highs and lows, the danger they faced and their triumphs. The photography was amazing; it really added to the story, brought it even more alive than it already was.

We get the story from both Luke’s and Jean-Philippe’s perspectives, a personal kind of diary written in a tone that is warm and inviting, almost like you are listening to camp fire stories. You will laugh, you will cry, you will shudder in horror, gasp in terror and you will thoroughly enjoy this true story of a journey that many would only dream of and few would dare to undertake. Fabulous book, I thoroughly enjoyed it and it is highly recommended for those who love travel and survival stories but also for those who need to see that when you put your mind to it, anything is possible.

Dancing with Death: An Epic and Inspiring Travel Adventure by Jean-Philippe Soulé with Luke Shullenberger is an adventurous and inspiring journey undertaken by the two authors, a three-year 3000-mile paddle that would take them across seven countries from Baja California to Panama. The CASKE 2000 (Central American Sea Kayak Expedition) is aimed at experiencing and writing about the lifestyle and culture of the natives they met during the trip. Their expedition also promotes kayak eco-tours.

It is a story of courage, perseverance, mental strength, self discovery, endurance, and exploration, and the rawness and starkness of the narrative will leave readers in awe. The events shared in the form of stories and journal entries, and their challenging three-year journey which includes storms, bandits, alligators, sharks, and many other precarious adventures, make this a compelling read. The book is honest and straightforward and the authors are very vocal about the expedition, their experiences, and their exploratory journey, making it fast-paced and exciting to readers. The images capture the sights and sounds of their journey, making it palpable.

Their decision to choose sea-kayaking played a key role in helping them explore the untouched jungles and the inhabitants living there, which would never be possible as tourists. The culture of the indigenous people, preserving the planet, the kayaking adventures, the terrors they encountered in the water, and the tropical diseases make this journey invigorating. This book will definitely encourage and inspire many readers to use kayaking and seamanship to travel and explore.

Dancing with Death: An Epic and Inspiring Travel Adventure by Jean-Philippe Soulé is a non-fiction travel book that talks about Jean-Philippe’s travel adventure kayaking from Baja to Panama, along with his fellow expedition partner, Luke. This book takes us, in detail, into the very starting stages of the expedition where the idea was first conceptualized by Jean-Philippe, the massive amounts of research and data gathering that went into it even before the actual stage of planning, his talks with and eventual partnership with Luke and how that came about, the meticulous planning of routes, skills and fitness training, budget, equipment, sponsorships, etc. that went on for months, and of course the actual day to day events of the travel expedition itself and all of their adventures and mishaps along the way. There is a strong component of getting to know indigenous cultures along the way that was a crucial part of this undertaking from the beginning that has been narrated as well.

Dancing with Death: An Epic and Inspiring Travel Adventure by Jean-Philippe Soulé is a wonderful travel memoir and I was hooked from page one. Having read many travel memoirs before, I found this one stands out as written by someone who obviously is a born adventurer at heart, one who also puts in the hard work necessary to actually make expeditions like this possible and successful. The narrative is also interspersed with Luke’s experiences in his own words. There are many photographs in the book which complement the story very well and bring the actual landscape and people to life. This is a great travel book that I would highly recommend.

Dancing with Death: An Epic and Inspiring Travel Adventure is a nonfiction adventure account written by Jean-Philippe Soulé with Luke Shullenberger. Soulé was a renowned mountaineer and Shullenberger a national team cross-country skier. Meeting in a race while working in Japan led them to plan and share a most extraordinary and often grueling adventure. While Soulé had never even been in a kayak before, and Shullenberger had only minor paddling experience, they were determined to travel from Baja, California to Panama by kayak. Soulé called his proposed trip the Central American Sea Kayak Expedition 2000 (CASKE 2000). He planned for three years paddle the 3,000 miles of Atlantic and Pacific coast they’d explore. CASKE 2000 was to be more than just an extreme adventure, however; Soulé’s goal was “to experience and write about the culture and lifestyle of the native peoples we will meet.” After encountering some resistance from Caveman Gray, both him and Ed Gillet, the kayaking greats that Soulé hoped would become his mentors, trained them for this expedition. Their efforts in preparing for the journey would help them survive, but neither could have imagined how arduous and often painful the actual trip would be.

Dancing with Death gives the armchair adventurer a front row seat as the two explorers face massive waves, sharks and endless hordes of biting, stinging insects. Soulé and Shullenberger’s journal entries are interleaved throughout the book, and I loved seeing the journey through each man’s perspective. Their vastly different world views and personalities underscore the team effort shown throughout their challenging trip, and hearing both participants’ voices added dimension and nuances to the work. Both are solid and fluent writers, perfectly suited for adventure travel writing, and their photography is brilliant. Their accounts of interacting with the indigenous people they met were illuminating and powerful. Unlike most other travel adventure books I’ve read, I’m glad I wasn’t an actual participant in this journey. The sand flies alone were a sufficient obstacle, but I finished the book in awe of the journeyers and what they were able to accomplish. Dancing with Death: An Epic and Inspiring Travel Adventure is most highly recommended.