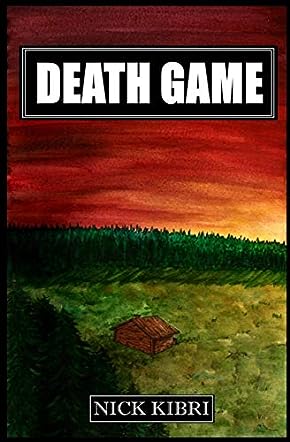 Nick was born in 1986 in Bulgaria, but immigrated with his family to the USA, as a teenager.
Ever since Nick was a child, he’s been a keen reader. He had dreamed of being a professional football player. Realizing he didn’t have the right stuff for a pro career, he majored in Public Administration with a Bachelor’s degree and in Business Administration with a Master’s degree.
He began writing short stories in his childhood but began writing novels as an adult. Nick has always been thrilled by the supernatural. Spending time researching different supernatural phenomena throughout the world. His interest in novels spans the fantasy, mystery, suspense and horror genres.
He has visited many countries and has studied the mythologies and the legends of multiple nations and cultures. All these things inspired him to begin writing.
Death Game is his debut novel. Nick was inspired by a nightmare that he had and decided to share this amazing dream by writing his first novel. As a writer, his ambition is to give his readers enjoyment through interesting thought provoking stories.

Death Game by Nick Kibri is a horror story with a difference. Deep in the Alaskan wilderness is a forest. Dense, dark, full of mystery and hiding a terrible secret – a portal that takes you to another world, a portal that lets savage creatures in as and when they please. Is there any way to defeat the creatures and stop them from destroying the world? The armed forces won't go near the forest and there is no-one to rein in the supernatural forces. So what do you do? Turn it into a reality game show on TV. With a prize on offer of $10 million to anyone who survives the Death Game, millions tune in to the live show on pay-per-view TV to watch the death, destruction and wanton gory violence unfold before their very eyes.

Death Game by Nick Kibri was an interesting story for the genre. There have been one or two films along a similar line but they don’t go into the detail that this book did, so be warned if you are squeamish; this book may not be for you. However, if you love the horror genre and you want something different, this is well worth reading. Death Game is a fast-paced story, with little left to the imagination and it has been written in a way that hooks you and makes you want to keep reading. The characters are developed well and the story is unique in the genre, something a little different. There is definitely plenty of action and plenty of suspense, not to mention the gore and the horror that goes with it. Not recommended for younger readers!

This book is a breath of fresh air. It is truly unique in its genre. From the very beginning the atmosphere of the story gave me the creeps. The plot is very dynamic and you quickly dive into the plot. At chapter 5, I was already hooked up and wanted to see how it will end. There are multiple plot twists in the book, so whenever you think you know what will happen next you get surprised. What I love the most about the book is the fact that the author focuses on the psychological suspense and not that much on the gore. It touches many aspects of the human behavior under stress. The characters are well developed and it is easy to relate to some of them. There is plenty of action in the book. The characters are vocal, which allows the reader to feel their expressions and reactions in different situations. There are all sorts of emotions represented by the characters, which gives credibility to the story. It would make a great movie.