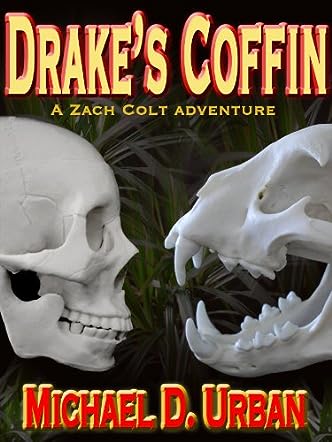 Michael D. Urban was born outside of Pittsburgh, Pennsylvania. A Dartmouth College graduate, he now lives in New England with his wife, daughter and Portuguese Water Dog (who happens to have the same grandfather as Bo Obama).

Drake's Coffin is the beginning of a planned series of several adventures featuring his Drake's Coffin hero, Zach Colt. Mike's next novel, Ironsides’ Peril, a terrorist thriller set in Boston, will be out in 2012.

Drake’s Coffin was named a Finalist in Action/Adventure by the Next Generation Indie Book Awards 2012. It is also nominated for Best Thriller and Best eBook by the Global eBook Awards. The novel is available as an ebook from Smashwords, Amazon, the iTunes Bookstore, Barnes & Noble and other ebook retailers. A paperback version may be purchased directly from the author’s website, www.michaeldurban.com.

For over a decade Mike Urban lived and traveled throughout Central America. He worked in federal law enforcement both in the States and overseas. Most recently, he was a trial lawyer in private practice. As a boy, he did dive in search of Sir Francis Drake's lead coffin, which has been resting for over 400 years somewhere on the ocean floor near the entrance to Portobelo Harbor, Panama. He has not found it -- yet. He may be contacted through his website, www.michaeldurban.com.

Sir Francis Drake, famed English explorer, dies in 1596 and is buried at sea near Portobelo Harbor in Panama. In 1976, Scout Master Robert Medvedic of Post 31 leads a group of boys named Herbs, Injun, Zach, Cub, Walt, Fritz and S-Man on the old road, the Camino Real, that Drake and the Spanish explorers of long ago used to transport stolen Inca treasure to where their ships were waiting to take it back to their home countries. Drake is supposed to have buried one of those treasures under a Banyan tree in the jungle as Spanish troops were about to overtake Drake and his men. Medvedic and the boys are taking the sixty mile hike on the Camino Real from Old Panama on the Pacific coast to Nombre de Dios on the Atlantic coast of Panama. Will they find the Banyan tree under which Drake buried gold doubloons and jewels and will they survive the untamed jungles and exotic and often dangerous wildlife along their route?

"Drake's Coffin" is a highly well-written, well-edited adventure story that is packed with violence and high-paced action. It was a Finalist in the 2012 Next Generation Indie Award and that is quite understandable as this is one thrilling, readable story that readers will love. The plot proceeds with twists and turns, often unexpected, to the story's end. The characters of Herbs, Injun, Fritz, Cub,S-Man and Zach are well-drawn and totally believable even as the concluding chapters have them as middle-aged men, no longer teenagers. Other characters such as Medvedic, his assistant Uribe, youthful psycho Sidney, Chief Okarmo and his son, are equally well-created and add to the storyline."Drake's Coffin" is a must read, to say the least!