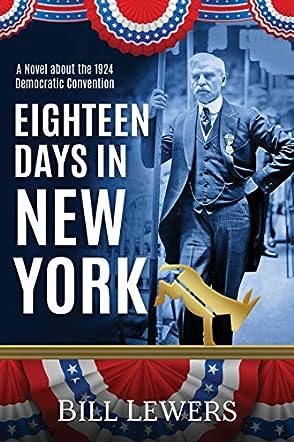 Bill Lewers was raised on Long Island in the 1950s and has been a political junkie for as long as he can remember. He holds B.A. degrees from Rutgers (mathematics) and the University of Maryland (history) and a M.A.T. degree from Harvard (mathematics education). He lives in McLean, Virginia with his wife, Mary.

Bill is a lifelong fan of the Boston Red Sox and this passion is reflected in his first book, Six Decades of Baseball: A Personal Narrative. This was followed by A Voter’s Journey which is one citizen’s sixty year romp through the American political system.

Reaction to Gatekeepers was sufficiently positive, that Bill decided to turn what was originally a stand-alone novel into a series. November Third (Book Two) examines things through the eyes of the “rovers,” seasonal employees who support the election process in a variety of ways. Things take a more sinister tone in Book Three (Primary Peril) as “murder most foul” casts its dark shadow over the election landscape.

Eighteen Days in New York: A Novel about the 1924 Democratic Convention is Bill’s first venture into the world of historical fiction.

Eighteen Days in New York: A Novel about the 1924 Democratic Convention by Bill Lewers is an enthralling historical fiction novel with a touch of time-travel thrown in for good measure. Claudia Burnham was excited – a cub reporter for the Washington Chronicle, she had just received her dream assignment, travelling to New York to cover the 1924 Democratic Convention. This was her chance to make her name in the hurly-burly world of male-dominated journalism and politics. Her only problem was her male partner on the trip - the notoriously unreliable James Wigginton, who, true to form, seemed more interested in the delights of the flesh and the temptations of alcohol that New York had to offer. In the twenty-first century, Carl Marsden and his fiancée, Cindy, were looking at possible venues for their wedding when they arrived at their final option for the day. When Carl, a self-proclaimed politics aficionado, realized this venue was once the home of Senator Oscar W. Underwood, a Senator from Alabama who had sought the nomination for President at the 1924 Democratic Convention, he was intrigued. Told there was a trunk of the Senator’s old papers in one of the rooms, Carl begged to take a look at it whilst his fiancée checked out the wedding venue for them. Finding a diary of the Senator’s from the convention in 1924, Carl was enthralled and engrossed, until he started to feel light-headed and dizzy as his adventure began.

As a self-confessed political junkie myself, I was excited to read Eighteen Days in New York and I certainly was not disappointed. Author Bill Lewers has taken what these days is a fairly predictable exercise, the political convention, and reminded us what a truly chaotic and exciting adventure these conventions did actually used to be. The political intrigue, the backstabbing, the threats, the long days and equally long nights that made up these items of political theater in the early days are beautifully captured by the author. I loved the fact that Carl and Claudia had a familial connection to each other, through Carl’s fiancée, Cindy, and this just added another layer of authority and realism to what is sometimes a difficult concept to navigate for an author – time travel. The author’s use of these fictional characters to highlight what must go down as one of the most divisive and unusual political conventions in history was inspired. It was so easy to identify with Claudia, a feisty woman struggling to come to terms with not only a still very patriarchal society but a political process that had only just accepted women as equals in its ranks. Her interactions with Carl and his determination not to spill too much information about what was to come were the highlights of the story for me. This could have so easily turned into a dry rendition of an extremely long and tiresome process and that it never did is a definite plus for this author. I thoroughly enjoyed this solid read and will be looking to access the earlier books in this series. I can highly recommend this story.

Eighteen Days in New York: A Novel about the 1924 Democratic Convention by Bill Lewers is a political time-travel fiction novel that centers around the longest, most drawn-out nomination convention in the United States history. The plot revolves around a female reporter named Claudia Burnham who is covering the lead-up and casting of ballots from a unique position, as she is not only a reporter but she is also an alternate delegate for her home state. She meets Carl, who is of the present day but finds himself seated with Claudia in 1924 without any notion of how he got there. In shifts between the present and the past, the casting of ballot after ballot after ballot in a brokered convention as it was defined in that time, we get to know the spitfire newly minted full delegate, the politics and their shockingly controversial issues, and the blossoming of a story that will resonate for generations to come.

I had no idea going into Eighteen Days in New York that time travel would be involved, but what a heck of a great spanner it turned out to be. Bill Lewers is able to weave a strong narrative that captures so much of the past and breathes life into an event that most everyday Americans do not know about. I'm usually uncomfortable when men voice a female protagonist but the writing is tight and the dialogue feels realistic, even if at times the position of those we are rooting for comes off as a little too idealistic. I think in reality the vocal opposition to organizations like the Ku Klux Klan didn't match how delegates positioned their votes. Without a backstory on the fierce opposition by our fictional characters, it can be difficult to understand how they got there. However, as we get to know Claudia that fleshing out does happen and her fortitude stems from something far stronger than lipservice. This is an excellent novel that was worth the investment of time, especially given the surprise armchair adventure to be had through time.

Eighteen Days in New York: A Novel about the 1924 Democratic Convention by Bill Lewers is a heavily researched historical fiction novel that will keep you up at night to read just one more page. Set in the year 1924, the story follows Claudia Burnham as she fought to make her presence felt in a field that was dominated by conceited men. Claudia, a reporter, was asked to go to New York City to cover the Democratic National Convention. However, she was not prepared for what she would face. As the candidates at the convention dueled it out for the votes and sponsors, Claudia looked for information on driving forces such as the KKK and the League of Nations. All she wanted to do was make things better. But what could one woman do in a world that was ruled by men? Would anyone even listen to her?

Boy, was Claudia almost too charming for her own good. This woman had a golden tongue, and she knew how to use it. Bill Lewerswrote some magical dialogues for Claudia, and for that alone, I would like to give kudos. Claudia’s character was not very complicated. She was a simple woman who wanted to make a difference. She had the intelligence and the guts to stand up, but the people around her were simply not interested in listening to her in the beginning. But she claimed her place in the chaos and made her voice heard by all.

I could only imagine how the author must have researched the topic. The background building was phenomenal, and the descriptions were vivid. I could almost imagine myself beside Claudia as she gathered information to report back to her boss. It was such an interesting look into the Democratic National Convention, the politics of the USA, and before the politics in the country became overly complicated. Eighteen Days in New York is such a powerful novel. Claudia’s character was the driving force of the story, and I just loved her for all her flaws!