A Time to Embrace Ashera of the Kingswood 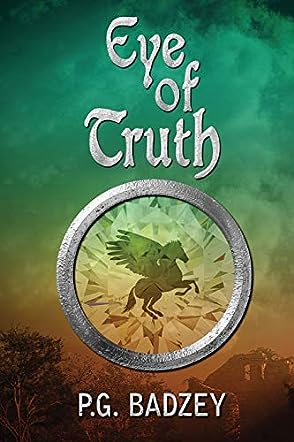 Join the adventure of the grey riders in P.G Badzey's The Eye of Truth. There was a prophecy, a song of heroics and danger to come, of rising heroes, and a dark rider. On their quest to learn the truth and the meaning of this cryptic verse, Dar Cabot and his motley crew soon discover there are more dangers and secrets within their own ranks than they could have imagined. Friendship and loyalty are challenged as secrets capable of destroying their quest and their friendship come to light. Will the bonds they have forged during their previous adventure remain, or will foundations based on deceit by avoidance see them crumble. Time will tell, but it will not wait, and evil will thrive as those who should oppose it falter.

The Eye of Truth is the second book in P.G. Badzey's The Grey Riders series, written in a character-focused third-person perspective. Readers are drawn into a charming and rich tale of magic, loyalty, friendship, and secrets, mainly from the perspective of Dar Cabot. I enjoyed the complexities of the plot and characters, and their development and alterations as secrets are uncovered. I enjoyed the exchanges between characters, sometimes humorous, other times wrought with emotion. With good world-building and the inclusion of different cultures, characters of alternative religions, backgrounds, and races overcome differences and work together. The acceptance of who each one is, and their experiences together, strengthen the connection of the group, but that’s not to say they are infallible and unbreakable. Danger, action, threats, and camaraderie will keep the reader engaged as monsters and adventure, along with the impending threat of evil and assassins compel them to read on.