Blessings From The Four Winds Gifts of a Dark God 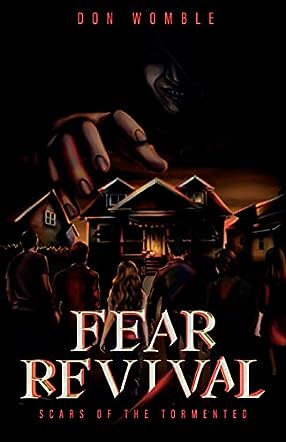 While touring a haunted house, a group of teens and their priest fight to survive when their worst fears come to life in the bloodcurdling horror novel Fear Revival: Scars of the Tormented by Don Womble. High school seniors Joseph, Mary, Malcolm, Barry, Selena, and Mark go to a haunted house with their priest, Father Mackenzie, for their final Halloween group activity as students. He has been taking them to this same haunted house for years, and this is their last time going together before graduating. However, something about this year's event is different. Once the five students step across the attraction's threshold, the door slams shut and locks behind them. Separated, each one of them confronts their darkest fears while facing a cruel and bloodthirsty adversary. Outside the house, too much time passes, and Father Mackenzie begins to worry. Entering the house to check on his charges, Father Mackenzie realizes he has not entered a haunted house but a death trap. Can they escape? Or is it already too late?

Fear Revival by Don Womble is a terrifying novel, as nightmare-inducing as the horror film, Nightmare on Elm Street. The psychopathic villain is the epitome of evil. When he enters the story, his character takes on the embodiment of the devil. Skillfully written, this spine-chilling story has elements of a psychological thriller threading throughout the story. From the start, a sinister ambiance lies beneath the plot's surface, creating an uneasy and alarming atmosphere that permeates the storyline. Brimming with horror, the story's feelings of dread, fear, and suspense escalate, ultimately reaching an electrifying and shocking conclusion. It is a phenomenal novel that will thrill Stephen King fans and everyone who relishes stories with morally depraved villains.

Fear Revival: Scars of the Tormented is a young adult horror novel written by Don Womble. A group of high school seniors is persuaded by their local pastor, Father McKenzie, to visit the haunted house they had frequented for years on Halloween. However, their youthful activity quickly turns sour when they witness a man doused in acid dying before their eyes. Soon, each member of the group begins to have hallucinations where they live out their worst fears. When Barry's father and Pastor McKenzie enter the house, they find themselves in a similar situation. The teens and Father Mckenzie must now rally together to save themselves from the psychopathic ways of their tormentor, who calls himself the Death Dealer. As they find their way to freedom, they realize the killer must be someone from their past.

If you're a fan of movies like Scream or The Shining, you're going to love Fear Revival: Scars of the Tormented. Author Don Womble incorporates heavy topics such as teen suicide, drug abuse, and domestic violence that add serious weight to the narrative. The plot is fast-paced, riddled with twists and turns that keep your eyes glued to the pages. Each character has a backstory of their own that makes you sympathize with their plight. I found myself particularly invested in Barry's and Father McKenzie's storylines. There are plenty of scenes depicting gore-filled violence and thrills that will appeal to slasher horror genre fans. If you're looking for something spooky to delve into this Halloween, this is the book for you.

Fear Revival: Scars of the Tormented by Don Womble is a book in the horror genre. The events in this book take place in Fort Worth, Texas in the year 2000 during Halloween. A group of six childhood friends wants to make their last Halloween together memorable, so they've made plans to celebrate being "eighteen only once" at a friend's party. Before heading over, though, they make a detour at Mr. Death Dealer's haunted house. Setting foot in a haunted house owned by a guy called "Death Dealer" - what could possibly go wrong? The group soon learns that their host has set the stage for a life-altering experience. One that isn't good for an individual's health. Will they escape from the Death Dealer's clutches? Will any of these six people live to feel the warmth of the sun again?

Fear Revival: Scars of the Tormented gave me a fair amount of hair-raising horror. Mr. Death Dealer was responsible for most of those instances, as he sure knows how to instill fear into his victims and his reader. Another great aspect is that most of the horror is psychological, not physical, such as the retelling of one character's traumatic childhood due to his parents' actions. Having most of the horror being psychological is a good thing and refreshing because I don't think I could read another book that has demons and decapitating individuals for its entire duration, as the physically-oriented horror approach becomes dull after a few pages. On the other hand, Don Womble's focus on psychological horror never gets boring or repetitive, as there are multiple ways for the horror to play out, as opposed to having a character scream and then having their head chopped off by some grotesque monster. The book's plot and characters were also highlights for me, as both were well written and had considerable thought put into them. Fear Revival was a really good read so I'd recommend this one to horror lovers, and remember to read this book at night or, better yet, during a thunderstorm to set the mood and atmosphere.