My Crumby Guide to Failing Dotty and the Withered Hand 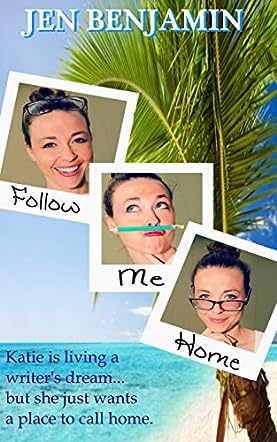 In Follow Me Home, Jen Benjamin has her heroine, Katie Kendall, tell her story in the first person, making it easy for us to understand Katie's doubts, insecurities, and loneliness. When the book opens, Katie has already had her first novel published; it became a best seller, and she and her husband Jeremy have moved to California from Wyoming so that Katie can help to produce the movie of her book, also titled Follow Me Home. This uncomfortable marriage ends abruptly when Jeremy returns suddenly to Wyoming and files for divorce. Katie signs the papers. She is now completely on her own, since her entire family has all died. Her touchstone in Wyoming is her best and only friend, Ashley.

I would have liked to hear more about Ashley, the best friend, but as in so many chick-lit stories, it was simply her job to be a satellite around the main character, Katie. It seemed beyond whimsical to me that a high-powered, sought-after, and popular movie director, Julia Giuliani, would suddenly in a single day become Katie's new best friend. But they did click and work well together as a team, both professionally and personally. I felt that Katie's responses to becoming a fish out of water in Hollywood, recently divorced, quietly turning thirty, and being a suddenly successful novelist and producer, were all rather appropriate. I wanted to shake her to stop her from calling herself crazy, but finally, Ashley does exactly that.

I liked the way Jen Benjamin developed the relationship between Katie and the pop superstar she chose to play the leading man in her movie. Jesse, nine years her junior, is immediately smitten with the woman who has written this amazing book. He is thrilled to be given the chance to leave his teenage singing career behind him and start a new career as an adult entertainer. Jesse is from a normal, loving family, and he stays well-grounded, knowing what he wants. In the last chapter, the author nicely ties together the two Follow Me Home books, the one we're reading and the one that is the story within the story. Jen Benjamin's writing style is not full of corny jokes or banal cliches. It's intelligent and wryly humorous, a solid four stars.