Explore the World of Chemistry 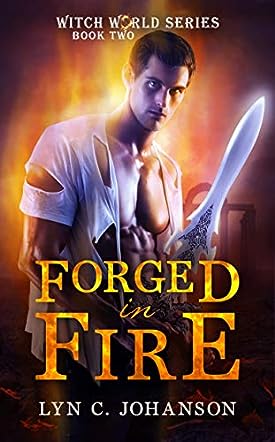 A computer science major, Lyn C. Johanson discovered her passion for writing romance stories during the long and stressful months spent finishing her master‘s thesis. It encouraged Lyn to open a new blank page and let her imagination take flight. Several years later, her first romance novel was born.
​
Her stories transport the reader into the darkly sensual world where the magic of romance meets fantasy. When she’s not writing, she enjoys spending time with her husband and sons.

Ciaran is determined to simply survive his trials and tribulations in the Underworld, believing it a just trade for saving the lives of his new nephews. But he knows nothing of the horror that awaits him or just what he may be capable of as he struggles through. But simple survival stops being enough when he turns the head of a demon. Gem is not just any demon. Her own secrets mean that she has much to hide and much to lose by trusting Ciaran with her secrets. But what they have together maybe more than either of them can stand to survive without, especially if they hope to escape the horror that they have lived amongst for too long. Forged in Fire by Lyn C. Johanson is definitely a book you will not forget soon and one you’re going to want to read again and again.

I had already read the first book by this author and I was extremely excited to have the opportunity to read this one. The writing was what I had expected and I found myself drawn into the story of Ciaran and Gem (or Desiree) quickly. I wanted to know everything about them and I was not disappointed because Forged in Fire definitely doesn’t let you down when it comes to romance and adventure all at the same time. You feel like you just can’t get enough of the story and the people in it, whether it’s Kaden and V or Ciaran and Gem.

Forged in Fire by Lyn C. Johanson is Book 2 in the Witch World series, another compelling entry featuring two powerful characters that will remind readers of the fantasy tales of Dante Alighieri’s Inferno, only this time readers encounter the eternal struggle between good and evil, love and lust, and the rewards of sacrifice.

Desiree, the powerful witch, has been banished by the Council of Demons and now she rules a realm where the wicked and most hardened souls wallow. But what troubles her is the one soul that still bears some light, Ciaran. Ciaran is the embodiment of selfless love, a man who would suffer so that others can live, and that is why he embraces an eternity in hell. It’s to give life to his newborn nephews. Can he keep his purity and dignity when he encounters Desiree, the most ravishing beauty anyone has ever set eyes on, or is she really ravishing? Can he resist the temptation or will he be giving up his soul as well?

The story begins with intense action and sets the tone for the emotionally charged moments that fill the pages. The plot is well-paced and the writing so carefully crafted it makes for an enjoyable read. I enjoyed the way that Lyn C. Johanson allows the themes of religion, love, faith, and sacrifice to come across in the writing. The characters are compelling and memorable.

The idea of hell and punishment seems to be partly inspired by mainstream beliefs about hell, but the author’s imagination introduces elements that make the whole place fun to read about. The internal battle that Ciaran fights with his conscience is symbolic of the war that many readers fight every day. Although this is a very entertaining story, it asks the question about how readers make their choices and what their values are. You’ll be entertained, and you’ll ask serious questions about life. Forged in Fire is a very good read!

Ciaran, an un-dead human condemned to Zcuran in a deal to save his nephews, survives as the best warrior in the fights designed as entertainment for the demons of the underworld. That is until the former punisher, Gem, notices him and can’t help but be intrigued by something different she sees in him. Forged in Fire: Witch World Series Book 2 by Lyn C. Johanson follows the growing attraction between Gem and Ciaran, which is a force that each of them tries to deny for their own personal reasons. It is the differences they both try to hide, though, that strengthens the bond between them and makes them a target for other forces. With some help from the only friend Gem has, she and Ciaran attempt to flee Zcuran and the fate the Council of Demons has in store for the half-breed demon. In a world where there is no trust, can Gem and Ciaran work together and accept what they feel for one another to succeed, or will the punishments of Zcuran prove to be too much for even love to overcome?

Love and devotion are not typical qualities found in the underworld where demons enjoy pain and despair, but that is exactly what Gem and Ciaran find in one another in Forged in Fire: Witch World Series Book 2 by Lyn C. Johanson. The action is as steamy as the setting as these kindred souls are attracted to what each is trying to hide in an attempt at self-preservation. There is plenty of intrigue as the two are led to hope they can escape the torments of hell. Will their relationship strengthen them or bring them down in flames?