The Most Famous Landmarks in the World

Freckles and the Cost of Popularity 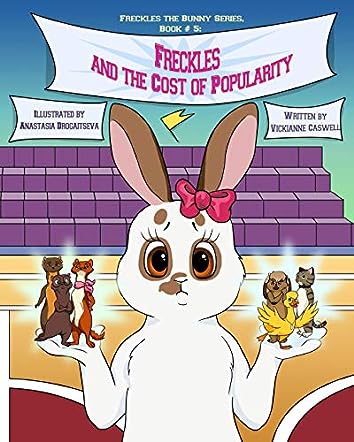 Vickianne Caswell wrote her first book, "Freckles the Bunny Series, Book # 1: Freckles is Scared of School" in 2012. After a lot of research, she came to the decision to publish the series herself. Vickianne has since published 8 books using the same printing/distribution companies. Vickianne currently has 2 children's series' out along with a cookbook series. She is expected to produce another children's series in 2019.
She has spent much time and effort working on promoting, selling and designing various things for her books such as website, cover designs, book cover ideas (and illustrations), videos, etc. She has been told many times by other authors that she has progressed a lot further than many others and often hears that she has a gift for writing. Everything she has learned was either self-taught or involved a lot of research and practice. She is now taking a variety of classes to expand her knowledge, such as marketing, management and blogging.
When Vickianne has free time, she is either writing or playing a game. Her favourites include Dragon Age, Divinity series, Mass Effect series and The Sims 4.

In Freckles and the Cost of Popularity, author Vickianne Caswell explores the familiar topic of relationships. The main character has to choose between being popular and being loyal to her friends. She discovers that the price of popularity is not one she’s willing to pay because it includes losing herself. When Freckles finds herself constantly going against her own convictions just for the sake of fitting in with the popular crowd, she needs to make an important decision. Is she willing to reject and make fun of her true friends just to please a certain group of people? Freckles finally comes to terms with the fact that she would much rather be nice and keep her old friends than be popular and mean. Vickianne Caswell brings up a situation that the majority of children and teenagers have to face at some point in their lives. Although the main topic of the book isn’t bullying per se, there are some instances in which the popular group intimidates and discriminates against others whom they consider to be inferior to them.

The story is well written and appropriate for children as well as younger teens. The characters are believable and the situations are credible. The way in which the story flows is consistent with reality because the main character actually seems to lose focus of what’s truly important instead of immediately doing the right thing. The language in which the story is written is easy to understand without becoming excessively childish and immature. Adults, especially parents and teachers, can also benefit from reading this story because it lends itself as a great discussion starter. Children can be prompted to identify every time Freckles makes a wrong choice and give alternatives for dealing with each situation in a better way. Overall, Vickianne Caswell did a great job of dealing with a current issue.