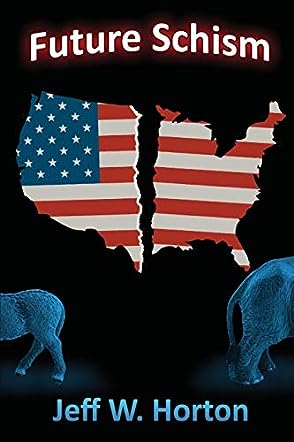 Jeff W. Horton was an Information technology professional for twenty-five years before deciding to pursue his lifelong dream of being a writer. Since becoming an author and screenwriter blending Christian Fiction and Contemporary Fiction, Jeff has written two screenplays and eight published novels in several genres including apocalyptic-fiction, science-fiction, religious fantasy, and romance thrillers.

Jeff W. Horton, author of Future Schism, is a prolific writer: in the past six years, since retiring as an information technology expert, he has published ten books! It is his vast experience with IT that he incorporates into this intriguing, dystopian future world of the United States … and what a brutal, unsettling world that is.

The year is 2176 or thereabouts and the US, as we know it today, no longer exists. After a second civil, cultural, and social war between the red and blue sides of the country - not hard to figure out the significance - both sides are experiencing unrest, poverty, hunger, loss of freedom of religion and other basic human rights that the US constitution granted its people centuries before. It’s only natural then that an underground resistance movement begins on both sides and gathers momentum: it’s time to overthrow the powers that be and establish a new America, one where injections don’t shorten the life span of a lower class to make them more physically productive, or where an aging member of the upper class gets a new heart before a child in desperate need. Daniel and Kayla are at the helm of each side. Though their initial reasons and goals for their respective sides are different, they are intellectually and emotionally invested in their overall goal. Ultimately they bring themselves and the two sides together, but they have a dangerous, life-threatening job to do. Will they succeed? That’s what will keep readers turning the pages of Future Schism.

Not all readers bother with the information contained in the prologue of a book, but it’s a good idea to read the prologue of Future Schism: it prepares us for what is to come and why. What it won’t prepare readers for is the very easy-reading, dialogue-filled style that Jeff W. Horton uses to tell this story: his storytelling technique is excellent. He is also quite the romantic and enjoys depicting the interplay between the sexes as much as the details of battle. His dystopian world is one where cell phones that “fried” people’s brains no longer exist and communication on all levels is through “holocoms,” but oddly enough, cars are still a mode of transport in 2176 while space navigation is via wormholes. It all makes for a most entertaining read, both from the point of view of the possibilities of where our whole world and not just the US will be a couple of centuries from now. If a blend of romance and dystopia is your kind of reading, you’ll enjoy Future Schism.