The De-Coding of Jo: Hall of Ignorance 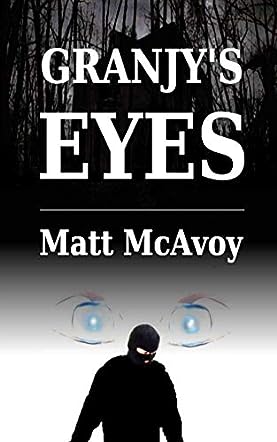 Matt McAvoy was born in Hertfordshire in 1974. As a child he attended the Torquay Grammar School for Boys and started writing fiction at an early age.

He has studied screen-writing and production, psychology, social policy and criminology, and has written several short stories, novels and screenplays, including "Kill the Witch!" and the critically acclaimed "Granjy's Eyes".

Matt lives in London with his wife Katherine.

There's more than a couple of adjectives to describe Granjy's Eyes by Matt McAvoy: gripping, twisted, frightening, unexpected...just for starters. But most applicable is chillingly realistic. Yes, Granjy's Eyes is fiction, but newspapers and crime archives are littered with heartless, narcissistic characters, like Ollie, who consider themselves too clever to be caught, and whose sense of entitlement exceeds moral and ethical boundaries.

Many of the offenders, like Ollie, are born into wealth: spoiled; used to getting whatever they want and taking what isn't given to them voluntarily, like sex. But Ollie is more than just a spoiled rich kid. His well to-do parents' money bails him out when he rapes a young woman. Once they wash their hands of him, he has only his grandmother, Georgina, dubbed Granjy by him, to whom to turn. Granjy loves him, dotes on him, and knowing she's rich, Ollie makes sure Granjy gets whatever affection he can give her in return. He moves in with Granjy and life is good, easy. Lots of money to party with and no need to work. What more could a young man want? All he has to do is be good to Granjy and one day all her riches and her beautiful estate will be his.

But there's a problem: as Granjy ages, develops diabetes, and loses her eyesight, she requires too much care for the self-centred Ollie. He hires paid care-givers, ever mindful of how much the costs are eroding his inheritance. On top of that, he's being plagued by nightmares, seeing faces of women he's raped but unable to clearly recall the circumstances. As he caters to Granjy's needs, her now unseeing eyes seem to follow him everywhere. Does Granjy know her beloved "Ollie Bear" better than he knows himself? How much longer must he wait for her to die, so he can claim her estate and his freedom? How many more years will her blind eyes seem to look right through him and into what he really is? A monster.

The ending to Granjy's Eyes is a delicious twist on an utterly sinister, psychological thriller. Is it plausible? Absolutely! Satisfying? You bet. Does Ollie have any redeeming qualities? None I can think of. He's quite despicable, but again, creeps like Ollie exist. Matt McAvoy should know. He's studied psychology and criminology and "spent many years working with young offenders as a mentor/project worker, and adult offenders as an officer with the public protection team."

Granjy's Eyes is beautifully bizarre. Matt McAvoy sucks readers into Ollie's depraved, narcissistic mind in the first chapter and doesn't let them go till the story's told. This is one book I couldn't put down and what's most amazing to me is how McAvoy held me spellbound for 164 pages primarily by letting me experience the workings of a twisted mind. Thank heavens, Ollie is only a fictional character. Or is he?