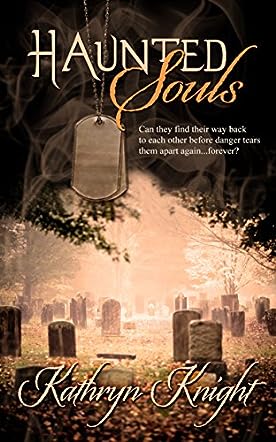 Haunted Souls by Kathryn Knight is a tale about forgiving and loving yourself, despite the guilt that weighs you down. Emily Shea had just introduced Sergeant Brett Leeds to their young son, Tyler. The two haven’t seen each other in four years, and already the shock of parenthood begins to weigh upon Brett. While his parents are struggling with their tense relationship, as well as their lust for one another, Tyler, meanwhile, befriends an unknown entity named Josiah. With a past that won’t leave them alone, and an uncertain future at stake, Emily and Brett must work together to ensure the safety of their son, even if it means putting up with each other. Knight weaves a Gothic story about a couple that picks up the pieces of their past, and learns that, even with the harsh realities in the world, they can still find refuge in each other.

To be honest, Brett irritated me quite a bit. Emily did everything she could to contact him, but he still blamed her. Even so, he does demonstrate a certain protectiveness towards her, and it’s clear that he still has feelings for her, no matter what he says. My attitude towards him changed when I finally realized the hell he’d gone through. Though his relationship with Emily and Tyler are slowly blossoming, he still has to deal with the nightmares he has, with Death carefully shrouding him in dark delusions. Then there’s Emily, who struggled with both her guilt and her worry over Tyler. Again and again, these characters show that, despite everything that’s happened, family is still family. Even if you’re separated by time, or memories, or even death, family is always going to be there for you.

This idea of family is an overarching concept of the book. Emily and Brett were still able to find one another, though there is a lifetime of sorrow between the two. A parent’s love for their child, friendship, and even romantic love are all interwoven within the words. Knight explores all aspects of that mysterious force, and shows that love is truly timeless. From the characters to the theme of love, Knight creates a dark, yet tender world that will leave the reader breathless.