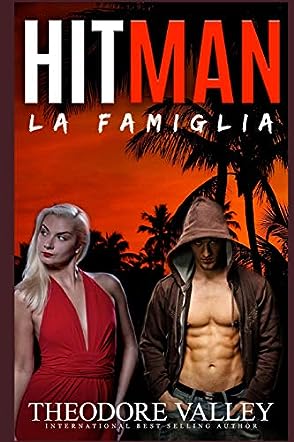 Ever since I watched the movie The Godfather decades ago, I’ve been curious about the mafia and what it would be like to be born into La Famiglia. Is it as dangerous as the movie depicted? Well, after reading Hitman by Theodore Valley, I have to conclude that yes, it certainly is that dangerous. Worse yet, once in, it appears there’s no way out except death. That’s because, as the elderly, anonymous narrator of Hitman, states: “The number one rule of the mafia is loyalty under all circumstances. If you lie, rat, steal, or are disloyal to the family, you die, it’s just that simple.”

Theodore Valley certainly drives the point home in this rambling, almost conversational fictional depiction of how that rule is enforced through generations. When Deanna, the daughter of a key mafia figure, falls in love with one of her father’s most trusted people, Erno (who makes a lucrative living from drugs), neither she nor her father realizes that Erno knows the truth about how her younger sister died. But when Deanna’s father finds out about Erno’s failure to disclose what he knows, he calls on “the Dean” to eliminate Erno. After all, as readers are reminded time and again, no matter how much you mean to a mafia kingpin, “You don’t mess with the family, La Famiglia!” The Dean is bad news for Erno: the well-paid Dean has an unblemished and very long success rate. Only three people know the Dean’s identity and the Dean always succeeds. Yet, Erno somehow survives the Dean. How can that happen? That’s one of the most intriguing twists in this very twisty crime thriller that explores both family and romantic love while inviting readers to share copious fancy dinners, savor delicious wines, and shudder at brutal family murders.

Hitman is an easy read, with plenty of dialogue once the connection between the characters has been established through several pages of narrative. Apart from knowing from the beginning of this story that the aging and dying narrator is himself a “hitman”, readers do not know his identity. Will we find out by the end of the book? Well, in the chatty style he uses to tell his tale, at the end the hitman cheekily teases readers, asking if we have figured out yet who he is. I have an idea, but I’m not sure. However, our playful narrator tells us there’s more to come in his next book about living, loving, working, and dying as a member of “La Famiglia”. Okay then, Theodore Valley: hit me one more time!