How Beautiful They Were 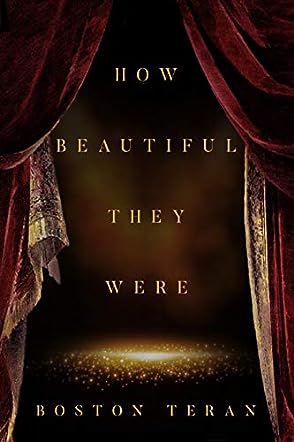 Boston Teran is the internationally acclaimed author of twelve novels, many of them translated into foreign languages. He has been named alongside great American writers like Hemingway and Larry McMurtry, as well as filmmakers John Ford and Sam Peckinpah, for his singular voice and ability to weave timely social and political themes into sweeping page turners that pierce straight into America’s soul. GOD IS A BULLET, currently in film development, is considered a cult classic that has been compared to such seminal works as Joan Didion’s THE WHITE ALBUM and John Ford’s THE SEARCHERS. NEVER COUNT OUT THE DEAD has been called a modern equivalent of MacBeth. THE CREED OF VIOLENCE sold to Universal, with Todd Field (Little Children) set to direct and Daniel Craig in the starring role. THE WORLD EVE LEFT US (TROIS FEMMES), first published in France, has been reviewed as “a true masterpiece” and GIV – The Story of a Dog and America has been hugely popular in Japan.

The author has been nominated or won over 17 awards, including The EDGAR AWARD for Best First Novel and the FOREWORD “Book of the Year Award” as well as the INTERNATIONAL IMPACT AWARD OF DUBLIN for Best Novel, the Best Novel of the Year in Japan and the John Creasy Award in England.

Boston Teran’s How Beautiful They Were reveals the prevailing spirit of the theatrical stage. Jeremiah Fields, the behind-the-scenes stage manager of Colonel Tearwood's American Theatre Company, shares his relationship with the infamous Nathanial Luck. As with all great storytelling, Jeremiah begins at the beginning, before the name of Nathaniel Luck was ever thought or heard of in America. In 1836, John James Beaufort storms the stage of London’s theatre district with his dynamic performances. One evening, believing he is alone, Beaufort is caught off guard by Lucretia McCarthy, the daughter of the renowned Dyer McCarthy. Lucretia confides in Beaufort, sharing her fears and her desire to run away. Ignoring the warning from his mentor, Colonel Tearwood, and the pleas of Lucretia, Beaufort auditions for a part in Dyer McCarthy’s production of The Pickwick Papers. Beaufort has no idea he is selling his soul to the devil for a role in a play. His lust for success, his talent and his love of Lucretia were about to be challenged in unimaginable ways. Thus begins the transformation of John James Beaufort into the notorious Nathaniel Luck. “Sometimes, life exceeds all your expectations.”

Literary excellence! How Beautiful They Were by Boston Teran is an eloquently told story. In the classic style, Boston Teran brings the stage to life. In all honesty, it made me want to read Shakespeare again. The story is divided into two settings; the difference between life in England and America is notably obvious. The story is a product of its time, portraying the old English traditions and America’s restless spirit during the time of abolitionists and the Underground Railroad. The collision of these two worlds creates a dynamic storyboard. The stage becomes a daring voice, a political platform for change. The narrative is an abyss of emotions, fear, sorrow, and insecurities that are tested by the forces of rage, greed, power, and corruption. The conflict is drenched with deception, murder, racism and the battle to escape the bondage of slavery in all its shapes and forms. The depth of the characterization is exceptional. Choices and risks propel the underlying question of Who am I, really? All the characters become players on the stage of life; consequently, each one must face their own tragic reality.

Creating an air of mystery, artistic subtleties and refined details are masterfully woven into the plot. Each play, written and performed within the narrative, heightened the intensity of the rising action. As the story moves toward its conclusion, surprising twists and turns expose the reality buried between the lines. (Especially in the character comparison of Wuthering Heights) As the action falls, the curtain rises on a dark stage; however, the light of truth shines upon the shadowed players, all that was hidden becomes clear and vividly understood. How Beautiful They Were is a beautifully written gem in the library of historical literature.