Stand Up For Bastards Tim with Daisygingerrockets aka Daggers The Murderess of Mayfair In Pursuit of Calm I Promised Not to Tell 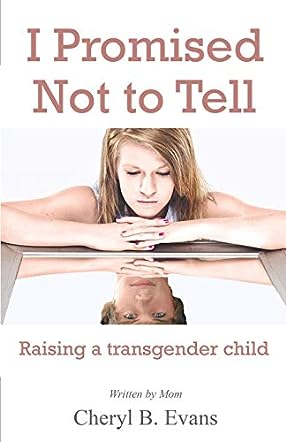 Wife, mother, friend and award-winning author, Cheryl B. Evans was born and raised in Canada. She has been happily married to her husband for more than twenty-three years and together they have raised two wonderful children, one of whom is transgender. In her spare time, Cheryl is an avid reader of non-fiction books and when she isn't writing or reading, she enjoys painting, time with family and sampling all things chocolate.
Evans' first book, I Promised Not to Tell, reached #1 in three categories after it's release on Amazon.com and continues to be a popular book in the memoir, LGBT, social issues and transgender categories.
Her LGBTQ parenting memoir became the seed for a new book entitled What Does God Think? Transgender People and The Bible which will be released in the fall of 2017.

In the closing pages of I Promised Not to Tell by Cheryl B. Evans, the author says she wonders if she has made a mistake in publishing this book. Let me begin by assuring her the only mistake would have been to not publish it. I Promised Not to Tell is quite possibly one of the most important books to date on a very controversial and little understood social issue: transgenderism. And what makes it even more valuable is that the focus is on helping parents recognize, and whether they like it or not, accept that their daughter might actually be a son or vice versa.

To enlighten others about some of the dreadful problems associated with a child being transgender, since she promised not to tell, Cheryl B. Evans has had to use fictitious names for real people. The real people in this story are members of her own family. I Promised Not to Tell is about Cheryl’s daughter, Jordan, whose transition from female to male begins around the time of puberty. Had the parents ignored or dismissed the warning signs that things just weren’t right for Jordan at that time, this story would most likely have had an unwanted and tragic ending.

But as Cheryl B. Evans states early in I Promised Not to Tell, and repeats throughout the book, what she and her husband wanted most for her children was their happiness. And everything these parents do in this book proves they mean what they say. They listened to and trusted in what Jordan believed was right for her; they educated themselves on transgenderism; they located knowledgeable therapists and doctors, and stood united and strong beside their daughter when faced with religious ignorance that claims such children are “not of God.”

Cheryl B. Evans has documented each life-changing step of Jordan’s transition from female to male so that others who may be facing the same issues and don’t know where to turn have a place to start, coupled with the knowledge they are not alone. Cheryl addresses issues like washroom use, dating in later years, and the gender affirming surgeries more frequently called sex reassignment. At the end of the book she includes a list of resources and contacts, including the names of doctors her family worked with.

Other issues raised by Cheryl are the complications that arise with simple day to day things like passports, birth certificates, driving licences etc. Think of all the official forms we fill out daily that ask us to identify ourselves as M or F. Well, what happens when F is now M? This paperwork can take months, even years to change over. And on deeper levels, Cheryl makes one look at the ramifications of dating, falling in love, and falling out of love with someone who knows your secret, and then tells all your mutual friends. Again, we face another social situation where people are forced to hide their true selves. As if there isn’t enough cover up of so much in our world already.

I’m sure it’s Cheryl’s hope that, if nothing else, I Promised Not to Tell will open a few more minds, clarify the myths and falsehoods, and get more people talking openly about what being transgender really means. If you are facing such a situation with your child, I urge you to read this book. Both you and your child need what Cheryl has so kindly shared with readers and parents. And when you do, I’m sure you will come away impressed not just by the courage shown by Jordan in this book, but by the love Cheryl and her husband have for their children and their compassion for all people. That love affirms what I’ve always believed: true love has nothing to do with gender. Love is love. I loved I Promised Not to Tell. Couldn't put it down. Highly recommended reading