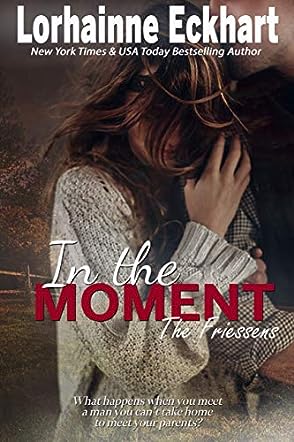 In the Moment: The Friessens, Book 8 is a new adult coming of age/romance novel written by Lorhainne Eckhart. Becky wanted something to happen to change the dull and dreary outlook she had on life. Her parents were awesome, even if they were a bit overbearing at times, and she loved her older brother, Trevor, and little brother, Jack. Everyone seemed to have their lives working as they wanted -- everyone but her. She was currently repeating her senior year in high school, owing to a disastrous attempt at taking robotics the year before, and was actually appreciating the extra time to get some idea of what she wanted to do with her life.

When she got back from school to the family ranch, Becky figured her mom would be there, but instead, she heard her dad talking on the phone. When he said that he wanted to have a talk with her, she began to get nervous. What had she done? Where was this going? When she realized it was one of those talks about her future plans, she knew that she should have had a suitable set of plans figured out just for this kind of talk. The two of them were preparing a salad for dinner as they chatted, with Becky cutting up the lettuce, tomatoes and other salad ingredients. Suddenly, she cut into something hard and felt a stabbing pain. She had sliced her finger nearly to the bone. She had woken up on the floor of the kitchen, and her dad had carried her to the car, got her to the hospital and insisted on a room with a bed for her to wait in with her family anxiously arrayed around her.

When the doctor came in, everything changed. While he was busy unwrapping the towel covering her finger, she was marvelling at how blue his eyes were. Dr. Tom Campbell was nine years older than nineteen-year-old Becky, and decades more experienced at life and romance than she was, and the proposition he would make when he saw her again at the market -- where she worked part-time --
was nothing she’d ever remotely consider under any circumstances, but something about the man gave her that feeling of being alive that she had been missing for so long, that excitement she had been craving.

In the Moment: The Friessens is the eighth book in Lorhainne Eckhart’s family saga series, but don’t let that stop you from reading this book as a standalone, or better yet, as an introduction to the Friessen family. I soon found myself engaged in Becky’s academic dilemma and wondering how she would fare having a relationship with the gorgeous, if troubled young ER doctor. Eckhart does a fine job of building her characters so well that you get the feeling you can predict how they will react to situations, but, like real people, her characters have plenty of surprises up their sleeves, which should delight even the most jaded reader. In the Moment is an inspired new adult coming of age novel that does have some steamy moments; however, they are beautifully and respectfully written. In the Moment is most highly recommended.

What happens when you meet a guy? THE guy? But he’s not the man you could ever consider taking home to meet mom and dad? Becky Friessen finds out when she meets Dr. Tom Campbell, the emergency room doctor responsible for stitching up her finger after a cooking accident. Becky is nineteen, a new college student trying to play catch-up with the rest of her class, when she finds herself in a possibly self-destructive relationship with a man who clearly wants her only for sex. She knows what she’s doing is wrong. Or is it? As Becky struggles with her inner conscience, the battle to be the wholesome daughter in a tightly woven family makes her come to terms with priorities in life’s decisions.

In The Moment: The Friessens Book 8 by Lorhainne Eckhart is the latest installment in a series that exhibits strong family values while at the same time unearthing serious material for debate. While the main character openly recognizes the controversy of sexual promiscuity, she relents to the forces of an overly demanding partner. This is not a message I find appropriate in the battle for female equality, yet I realize the allure for fans of Christian Gray. The dialogue is consistent with the story’s theme, the plot's circumstances are balanced and concise, and the detail is sound. In the Moment is clearly appropriate for the mature reader. I believe that Eckhart’s story line fits well with today’s easy-read appeal in women’s fiction.

In the Moment by Lorhainne Eckhart is the eighth book in The Friessens series. Becky is bored with the same life in the same boring place. Her parents, Brad and Emily, are probably the most loving and caring people on earth. Their love for each other has survived many adversities and is still blossoming. Even amidst this much love and care, Becky does not feel a connection with the life that she has been living. Her heart craves excitement, thrills, and adventure. She assumes that getting into a college that's far away from her home town might draw her out of the predictable life that she has been living so far. The only problem is that she is not sure about what course she wishes to pursue and what direction she wants to follow. However, destiny brings the excitement that she so dearly prays for in the form of Dr. Tom Campbell. The moment he meets Becky, he is mesmerized by her spark, naivety, and stubbornness. As he does not believe in dating, he proposes something so outrageous to Becky that any other girl would have stormed off. Nevertheless, Becky actually finds herself considering his offer, all the while knowing that the consequences of accepting such a disrespectful proposal would not sit well with her family.

When I started reading In the Moment by Lorhainne Eckhart, I was quite taken by the beautiful description of a big and loving family. The time that the author spent in giving life to the supporting characters -- Becky's parents and brother, Jack -- is definitely refreshing. I enjoyed the protective side of her dad, Brad, a lot. The author has really extracted the essence of fatherhood and poured it all into his character. His dialogues and reactions are supremely well written. Becky's character is a complex one. She is sometimes very confident and sure of herself, but the next moment behaves like a silly girl. I found her annoying in certain instances. However, only when a reader develops certain feelings (good or bad) towards the characters of a book, the reading becomes truly enjoyable. This is what the incredible writing of this author delivered.

The plot moved at a very graceful pace and the development was very smooth. The complex involvement of Becky and Tom was so unpredictable that I couldn't make up my mind about their relationship until almost the end. The only thing that bothered me for a few chapters was the resemblance of the plot to 50 Shades of Grey. The similarity was so close that for a while I wondered whether it was going to be an exact replica of that story. Thankfully, my suspicions did not turn out to be true and the author changed the course of the plot very elegantly and tactfully. The element of family love kept the book from becoming mere erotica. In fact, the family drama mostly took the forefront and a few sexual scenes remained in the background. The author's storytelling skills are definitely worth applause. The attraction between Tom and Becky is so intense that it will leave readers craving to experience such a magnetic pull towards someone themselves. In the Moment would appeal to readers who love an intense romantic tale with a family angle.