Hammer, Nails, and Happily Ever After? Incest, Murder and a Miracle 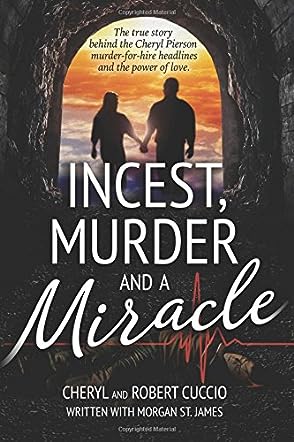 CHERYL A. CUCCIO, has been married to her soul mate Robert Cuccio for twenty-seven years. Cheryl is finally a strong, confident woman. She has experienced many far-from-normal trials and tribulations throughout her life, and uses her knowledge to help as many people as she can. In this book Cheryl speaks out about being a victim and how she became a survivor through strength and perseverance. Cheryl’s husband, ROBERT C. CUCCIO has been a registered nurse for twenty-one years with ONS Oncology Nursing Society certification and worked in various departments of hospitals including the ER. In 2012 Robert was pronounced dead after a massive heart attack, but brought back to life after 43 minutes without pulse or oxygen to his brain. He was awarded “Nurse of the Year for New York 2015” by the International Nurses Association, has been interviewed numerous times by the media, and hopes to help many people by sharing his experience. MORGAN ST. JAMES, an award-winning author, columnist and speaker, co-authors the Silver Sisters Mysteries series, and is on the board of Writers of Southern Nevada. A Corpse in the Soup, was named Best Mystery Audio Book by USA Book News. She has written various stand-alone books either solo or with co-authors, earned recognition and awards for multiple short stories and this is her fifteenth book. In 2012 she co-authored La Bella Mafia, Bella Capo’s chilling memoir about surviving abuse. All three authors have appeared on TV and radio shows and in other media forms.

It’s rare for me to review a book subjectively, but in the case of Incest, Murder and a Miracle by Cheryl Cuccio, Robert Cuccio, and Morgan St. James, I felt I had no choice. For starters, details, many of which were inaccurate, about the young teen, Cheryl, who paid to have her father murdered after he sexually abused her from ages 11-15 were blasted over every media channel available at the time. I remember the case well and perhaps readers will too. Secondly, like Cheryl, I also was a victim of incest for many years during my teens. But unlike Cheryl, my ugly secret never made headlines because like most victims of incest, I kept the deadly silence that seals such ugly family secrets, sometimes forever, and lets the public continue to believe situations like Cheryl’s are rare, when nothing could be further from the truth. I waited until I was 65 to write my memoir.

So, with that in mind, I am thrilled to have the opportunity to review Incest, Murder and a Miracle, Cheryl and Rob Cuccio’s effort to set the record straight and spell out the truth behind Cheryl’s father’s murder. Incest, Murder and a Miracle is a plea for understanding from the majority who choose to support abusers and condemn the abused. How well victims understand Cheryl’s motivations! We have lived her hell and know how desperately one wants the abuse to end. Victims reach the point of no longer caring what becomes of them; they cannot think clearly beyond just wanting the abuse to stop and to hell with the consequences. And anyone who hasn’t faced repeated rape by a father can understand Cheryl’s desperation. I certainly can, and as a result, applaud her efforts to tell her true story with the help of her husband Rob and author, Morgan St. James.

But there’s more to the book, Incest, Murder and a Miracle than just Cheryl’s story of the incest and subsequent murder. There’s a Part Two, as it were, that tells the fascinating true story of Rob Cuccio dying from a heart attack and coming back to life 45 minutes later. Yes, you read that correctly.That coming back to life was a miracle. But so was Cheryl’s incredible strength in being able to carry herself and their children through this medical trauma, that led to a malpractice lawsuit against her husband’s physician. Where did Cheryl find such strength after all she’d lived through, including imprisonment?

Cheryl Cuccio found her seemingly bottomless strength, as so many victims who survive sexual abuse do, in the struggles she’s had to overcome. Some victims succumb to alcohol, drugs, prostitution or end up in prison. Others, like Cheryl and myself, fortunate enough to find supportive husbands to love and lean on, are able to take control of their futures instead of being controlled by their pasts. All the adages apply to Cheryl’s story of Incest, Murder and a Miracle: the strong will to survive; when the going gets tough, the tough get going; in struggling we find our true strengths. Incest, Murder and a Miracle will speak to all victim/survivors of sexual abuse and encourage them to speak up, to believe there are some good, caring people in our world and that we too can have a happy ending to our sad stories. Well done, Cheryl, Rob and Morgan. Great to see another book shedding light where there is too much denial and darkness.