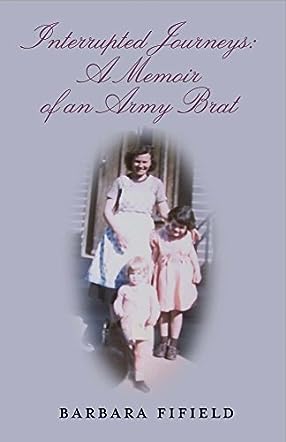 Interrupted Journeys by Barbara Fifield tells the story of her life, but concentrates mostly on her childhood and then the later years. As the daughter of a Major in the American army, they relocated several times, including stays in Japan, Germany, and several army bases in the United States. We learn of the effects the upheavals had on Barbara and her younger sister, Marilyn. The book opens on a particularly poignant farewell as she says goodbye to their German maid, Eliska, and like many people she grew to love, once the goodbyes were said, she never heard from them again. It becomes obvious that Barbara’s mother was a narcissist and that Marilyn was the golden child. Unfairly, Barbara was made responsible for caring for her from a very young age and suffered the consequences for her sister’s bad behaviour. This behaviour pattern and what is expected of Barbara continues right up until both her parents die.

I enjoyed reading Interrupted Journeys by Barbara Fifield and could relate to her many moves, losing friends, learning to fit in, attending new schools, unfamiliar neighbourhoods, and different activities. She had a very strict upbringing, and her descriptions of her mother and father brought them to life. She did not have an easy time and the reader can easily sympathise with her. I found the narrative occasionally backtracked and hopped from one country to another, and there was a little repetition, but for me this did not spoil the story and it was an enjoyable read. This book should be prescribed reading for all adults who relocate frequently, to highlight the difficulties faced by their children as they travel. One example was Barbara being forced to leave her dog behind when they returned to America, a heartbreaking story. Today, we would describe her upbringing as an abusive one, being left in charge of her sister when she was only six years old. On one occasion she was unable to prevent Marilyn scribbling on the walls and got soundly beaten for it – Barbara, that is, not her younger sister. I can only admire Barbara Fifield for having the courage to write her memoir, sharing her experiences with us and opening our eyes to a life lived as an ‘army brat.'