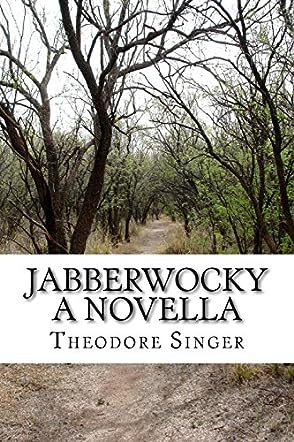 I used to work for literacy programmes and educational development programmes. I'm still an educator, but my current employment means I have to use a pen name.

"Jabberwocky: A Novella" is an attempt to take imagery and events from my dreams and daydreams and turn them into a story. Most importantly, I wanted the book to be a journey through strange places, so it became that simplest of all stories, the quest undertaken by the lone hero.

Jabberwocky is a coming of age quest fantasy written by Theodore Singer. Astreus has always lived in the House of the Jabberwock, as have his ancestors for the last five hundred years. His family's history is intertwined with that of the mythical beast, the Jabberwock, whose visage is carven and woven throughout the gloomy castle in the woods. When he turns 16, as the direct descendant of the line of his family, Astreus is made privy to the ceremony of the Quest. His father brings down the Vorpal Sword from its place on the wall of the Great Hall and charges him with the Quest. And, as his forebears have all done, Astreus accepts that charge and holds the great sword aloft. His father has no idea that Astreus sees more than symbolism in this ceremony and, upon reaching his eighteenth year, will set out upon the Quest in earnest, returning only after the beast has been slain.

Theodore Singer's epic fantasy novella, Jabberwocky, reminded me of how much I loved quest fantasies when I was a young adult. I would scour bookstores and libraries for the works of George MacDonald, Lord Dunsany and Mervyn Peake, and spend hours delightedly following young heroes as they set out upon their Quests. That early magic was rekindled as I read Jabberwocky. I followed Astreus as he battled fear and uncertainty and sometimes despair, and delighted with him at the beauty, adventure and enchantment he encountered along the way. Singer's writing is lucent and rich, and his imaginative tale is a sheer delight to read. Jabberwocky is a most impressive debut offering by this author, and I hope to be reading more of his work in the future. Jabberwocky: A Novella is most highly recommended.

Jabberwocky by Theodore Singer is a novella and tells the story of a young man born of a family with the legend of a famous quest and a monster known as the Jabberwock. Intrigued by a scene in a painting and a carved head of a Jabberwock, he vows on his sixteenth birthday during a family ritual that he will defy his father and go in search of the Jabberwock and take on The Quest. When he is eighteen, he sets out on his perilous journey. His ancestors have never attempted the Quest, his grandfather always dreaming of great adventures but never experiencing them. So he feels it is his destiny to embark upon the journey, which takes him to a world where what he sees and experiences, and the decisions he makes will change him forever.

The author, Theodore Singer, states that this story is inspired by the Lewis Carroll poem, Jabberwocky, and his interpretation has successfully turned it into a stand-alone adventure story. The author’s imagination has created an awesome world that I am sure would please Lewis Carroll himself. The descriptions of the Jabberwock and the characters he meets on his quest are memorable and incredible and I particularly enjoyed the history of the story – where no previous ancestor had ever attempted The Quest, and the effect the sword, the painting, and the Jabberwock had on the main character to compel him to defy his father and undertake this journey. Well written, a good rounded story, and an empathetic ending make this an enjoyable read.

Some of my other reviews:

This novella is beautifully written and rather lovely
2 April 2015
By @IngeniousCat
Format:Kindle Edition

Inspired by Lewis Carroll’s poem, this novella is beautifully written and rather lovely. If that isn’t enough for you, there are chess-playing telepathic cats.

It’s the story of a young man’s quest to find and slay the fabled monster. On the way he passes through several strange places – an island of bored immortals, a city of chess-playing cats… It’s a melancholy Wonderland for grown-ups, where events follow a magical logic reminiscent of myths and fairy tales.

I found the first couple of chapters a little slow, but the writing is so good I was happy to keep reading.

Embracing an old family tradition can be an incredibly meaningful experience. All Astreus has to do now is figure out the best way to use it.

Astreus was a well-developed, likeable main character. His contemplative, curious personality wasn’t at all what I was expecting out of someone who decides to hunt down an ancient beast, but it fit the tone of the plot incredibly well. I was also impressed by how he expressed his intelligence. He struck a smart balance between accepting his strengths without bragging about them and acknowledging his own weaknesses.

There were a few small pacing issues. At times the narrative lingered a little too long on the strange, wonderful places Astreus discovered during his search for the Jabberwocky. The descriptions of these settings were fascinating, but including so many details about them did occasionally slow down the plot at inopportune times. This is a minor criticism of an otherwise amazing story, though.

With that being said, the world-building in this tale was incredibly strong and complex. It stayed true to the types of people, places, and monsters I’d expect from a fantasy novel set in the past, but it also included a few fun surprises. As eager as I was to move forward and discover what happened to the Jabberwocky, I really enjoyed seeing the protagonist explore the far north. This could have easily been expanded into a full-length book.

Jabberwocky: A Novella is a must-read for anyone who loves the original Lewis Carroll poem about this creature.

Received a copy of this title in exchange for an honest review.

This book was a pleasant surprise. At first I wasn't sure that I would like it much.

I decided to review it anyway and I am glad that I did. This is the story of Astreus who's family has always had a special quest that generations of his ancestors have basically ignored. At first the book was a bit slow, but I found myself fascinated by the way he talked of going on this wild quest.

I cheered when he set out to find the Jabberwocky...where he discovers a grand adventure.

Where he finds immortal beings, talking-chess-playing-cats, evil wizards who've repressed people, a crazy follower and a letter...about the bridge of dreams.

That part was a bit creepy...and then to come to the end and find the jabberwocky only to be faced with a choice. Nope not telling what it was you'll have to read the book to find out.

I loved it even though it was short. I liked the choice he made in the end too.

About the Author:
Theodore Singer used to work for literacy programmes and educational development programmes. He is still an educator, but his current employment means he has to use a pen name.

A new review from IndieReader:

A young man takes up his family’s quest to slay the Jabberwock, and finds unexpected wonders into the bargain.

Astreus is the son of a noble family, the House of the Jabberwock, named for that great and terrible beast, which was seen once by the House’s founder five hundred years ago as it journeyed north. On his sixteenth birthday, Astreus swears like every son of his family to accept their Quest to slay the Jabberwock, but no one expects him to actually do it—he is supposed to find a suitable wife, settle down, and run the family’s affairs as his father and grandfather did before him. But he is determined to find adventure and new experiences and, to the great distress of his father, he takes up the Vorpal Blade on his eighteenth birthday and sets off on the Quest. As he journeys north, he finds many wonders—an island full of stunningly beautiful and enigmatic young aristocrats, a society of intelligent chess-playing cats, a valley cloaked in permanent gloom—but can he find, and will he slay, the Jabberwock? And will the results be as frabjous as he has been taught?

This is a clever and charming little novella that suffers from the best possible flaw a book can have—it is too short and leaves the reader wanting more. The author takes Lewis Carroll’s poem as a jumping-off point and runs with it gleefully but thoughtfully, adding on both delightful imagery and deeper meaning. Astreus is not a pure and glorious hero, exactly—he is a young man, and he has his flaws, but to his credit he thinks about them and acknowledges them, making himself wiser in the process. The different worlds and customs he encounters are engaging, creative, and believable, for a fantasy definition of “believable”—even his talking cats have real cat names well-suited to cat voices, like Gssa and Rrurr, and anyone owned by cats will find their behavior quite appropriately feline. The resolutions of each of the little mini-stories Astreus finds himself involved in are not always happy or predictable, but are thought-provoking, intelligent, and frequently heart-catchingly moving. Singer has a poetic descriptive ability that brings his scenes to life and adds emotional color to his tale, describing the rain by a window as “the weeping water slanting past,” and a sense of stillness as “a caught breath, like my grandfather’s painting, waiting in expectation.” The ending of the larger novella is not exactly expected, but it is satisfying and at the same time intriguing, leaving the reader wanting to continue the tale.

JABBERWOCKY is a bright and beautiful collection of stories, which take a classic poem in new and engaging directions. Lewis Carroll would be delighted.