To Every Page a Turning Cut Her Out In Little Stars 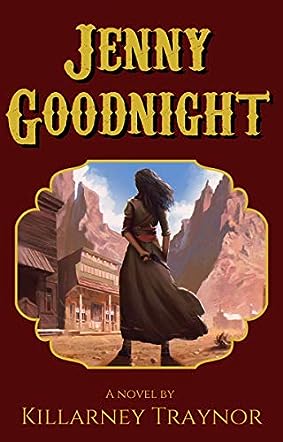 Jenny Goodnight’s father was a preacher man, anything but a role model when it came to sins of the flesh, but Jenny loved him. As she grew up, she became a missionary with a difference: she learned how to use a gun. She shows off that skill almost immediately after she arrives in Legacy, not realizing that who she’s pointing her gun at is one of Legacy’s most esteemed citizens, the big, hot-tempered John Evans. There are some serious conflicts between Jenny’s Uncle Matthew, who runs the local newspaper, and the entire Evans clan. Jenny’s determined to get to the bottom of why her uncle keeps writing anger-rousing articles, but to her growing dismay, the more she learns about her uncle, the greater her confusion. Are the Evans family members and their predecessors as bad as they seem? And if so, why does Jenny feel increasingly attracted to the roguishly handsome John Evans? As tensions mount in this “slow-burn” mystery, murders and attempted murders, including one against Jenny, occur. Who is behind it all? Why do most of Legacy’s citizens shun Jenny? Why is the matriarch of the Evans clan so cold and antagonistic toward Jenny?

Although my parents were keen on Westerns like those starring John Wayne way back when I was just a child, reading fiction based on the old West has never been one of my favorite genres. But Killarney Traynor, author of Jenny Goodnight, a historical mystery novel, could just change my mind: I truly enjoyed this book! Readers are kept in the dark about who is truly behind so much of the evil, and it’s definitely a surprise. Reading Jenny Goodnight was almost a cinematic experience. It wasn’t hard to picture this Western town, its inhabitants, their pastimes, the petty and major jealousies, the drinking, gambling, and lawlessness. That’s because Killarney Traynor is not only a gifted writer and a fan of Westerns but an actress, film producer, and director. She has been able to bring all those talents together in this novel. Jenny Goodnight would make a wonderful “old-time” movie that could find an audience today. Pick up a copy of this historical mystery fiction and see if you don’t agree. There’s never a dull moment. I loved it!

Jenny Goodnight by Killarney Traynor is a fascinating historical mystery. Jenny Goodnight has just lost her father but, before she can join the rest of her family, she is asked to check on her uncle, Matthew Goodnight, in the town of Legacy. Arriving there, Jenny finds herself in the middle of a war between her uncle, a newspaperman who holds nothing back, and the powerful family who founded the town. This war cannot be won without blood soaking the ground and when a murder occurs, Jenny becomes the prime suspect. Now she has no choice; to save her own neck, she has to step into the line of fire to catch the real killer. But this is a town of secrets and Jenny has her own. There’s a murderer on the loose and they will stop at nothing to keep their own secrets well hidden.

Jenny Goodnight by Killarney Traynor was one of those “wow” books. It isn’t a fast-paced story, at least not to start with, but it does pick up. Every page counts in this story; every page leads neatly to the conclusion without losing you along the way. Killarney Traynor has done a wonderful job with the characters, particularly with Jenny; she’s a likable character you can relate to and you’ll even like her uncle, even though you may want to give him a swift kick in the behind on occasion. This is a steady story that you easily become invested in and you’ll be rooting for Jenny and her uncle all the way through. Great story, I really enjoyed it.

Jenny Goodnight by Killarney Traynor is a historical Western tale that follows its tenacious female protagonist, Genevieve “Jenny” Goodnight. Jenny, a young missionary, is tasked by her aunt following the death of her father to leave her post in order to find her uncle, Matthew Goodnight, in the old frontier town of Legacy. As soon as she sets foot in town she is confronted by the gregarious John Henry Evans, a widower who just a few years prior had lost his wife and child, and a man who dances with Jenny in both body and spirit. The pair work in tandem when the culmination of dueling residents leads to death and Jenny finds herself in a precarious position that could ultimately lead to her own violent end.

Jenny Goodnight is an easy read in which author Killarney Traynor immediately immerses a reader in a frontier world through vivid descriptions. The sights and scents of the old west come alive through a first-person narrative, becoming even more pronounced as Jenny is faced with an unexpected and divisive death. She is alone in a place and at a time that provides no concessions for a single woman, particularly one who is threatened at virtually every turn. The dialogue is natural and does a wonderful job of maintaining tension and speaks of a power that even the determined Jenny is unable to reconcile. In remaining authentic to the time, there is a Christian slant that in no way comes across as contrived. The book does have a reliance on the placement of letters that generally feel as if their sole purpose is to quickly dispatch information to a reader. Overall, this is a story with a lot of pluck that is easy to get in to and I do believe it will be enjoyed by those who appreciate the genre.