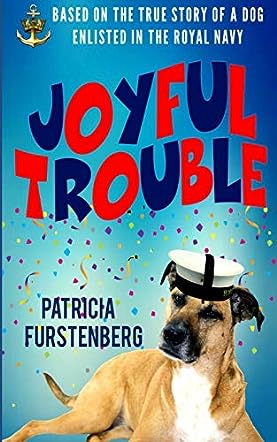 Patricia Furstenberg came to writing though reading. After completing her Medical Degree in Romania she moved to South Africa where she now lives with her husband, children and their dogs. Patricia became taking writing seriously after becoming one of the WYO Christie winners. She enjoys writing for children because she can take abstract, grown-up concepts and package them it in attractive, child-friendly ways while adding sensitivity and lots of love.

It is Parade Day, a very special day to remember a very special Royal Navy South Atlantic Ordinary Seaman. The parade was in honor and in memory of Joyful Trouble, a kind dog and an Ordinary Seaman, a Great Dane with a purpose. Ana and her younger brother, Tommy, are excited about the parade, but more than anything they want to hear the story about Joyful Trouble because their grandfather, a great storyteller, had once been an Ordinary Seaman, and it had been his responsibility to look after and look out for this Great Dane. The dog had an affection towards men of the sea and had caught the Navy’s and the town’s attention on more than one occasion due to his wanderings and traveling the train along with the seamen.

Patricia C. Furstenberg’s young people’s short chapter book, Joyful Trouble, is an amusing and fascinating fable, a story telling the life of one Great Dane in his role as an Ordinary Seaman in the Second World War. The story unravels as the grandfather, who, as a young man, was given the care and responsibility of this Great Dane, tells the story to his young grandchildren. It sparkles with good, old fashioned family time and family storytelling, treasured childhood moments that sadly get lost too often in this fast-paced world. The young reader will quickly warm up to the young children in the story as they learn about a very special Great Dane as well as a vital part of their grandfather’s past. This is a compassionate and heart-warming story.