Jujutsu in Japan to Brazilian Jiu-jitsu in America 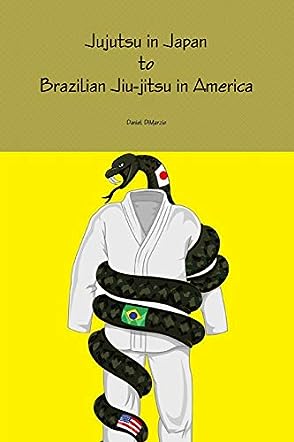 Daniel is the author of numerous books investigating cultures around the world. His books are available in stores worldwide. They can also be found in public libraries from Dubai to Kathmandu and beyond.

Stay Low and Circle Left, The Story of Floyd "Bad News" Winter-
Daniel puts an American War Hero and All Army Wrestling legend's story down on paper for future generations.

Igor Vovchanchyn, The King of Fighting-
Daniel travels to Kharkiv, Ukraine on the border of Russia near the ongoing conflict. There he meets Igor "Ice Cold" Vovchanchyn, one of the most legendary and feared MMA & No Holds Barred fighters of all-time.

Catch Wrestling, Stepping into the Snake Pit-
Daniel's journey training and learning about the history of catch-as-catch-can wrestling with legendary coach, Joel Bane.

Jujutsu in Japan to Brazilian Jiu-Jitsu in America, written by the avid supporter of various types of martial arts, Daniel DiMarzio, is a highly personal account of the two approaches to the martial art in which the author compares the histories, the techniques, and the personalities of the instructors involved. Having spent almost two years in Japan where he studied the art of Jujutsu, and having been involved with the practice of Brazilian Jiu-Jitsu for a few years, he is able to contrast the two approaches in depth. Although Brazilian Jiu-Jitsu has its roots in Japanese Jujutsu, how the two variants are taught is quite different, with the former being scheduled and structured in a far more formal way than the latter, which relies greatly on one-on-one instruction. The role that the two approaches have played in the evolution of the martial arts scene is also markedly different in that Japanese Jujutsu is grounded in the history and development of Japanese culture, with Brazilian Jiu-Jitsu being a much more westernized and hybrid approach to the martial art (in terms of which it is seen as part of the Mixed Martial Arts scene).

The personal insights that Daniel DiMarzio provides in Jujutsu in Japan to Brazilian Jiu-Jitsu in America should prove to be interesting to anyone concerned with martial arts, no matter whether the reader is an active proponent or merely someone who enjoys watching and reading about such sport on the popular media channels. That DiMarzio takes this form of martial art very seriously can be seen in the extent of research that he has undertaken. He provides footnotes throughout so that anyone reading this book can consult these other works as well. Although no avid sports fan myself, I found DiMarzio’s account fascinating, especially in terms of his own experiences with the art and his relationship with its key proponents, both in the East (under Yasushi Kiyomoto) and in the West (under Brad Court). If you’re a martial arts enthusiast, ensure that you obtain a copy of this work—it’s well worth it!