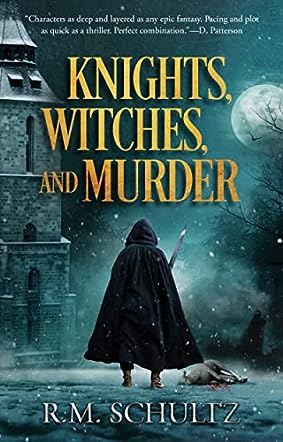 In the Kingdom of Duminborne, the people and witches hated each other, but they coexisted. A sage and a witch birthed twins. The first became the second, and destinies switched. Frallec became a sage while the king knighted Calec as a debt owed to the twins’ father. When the people of Duminborne started dropping dead from an illness that mimicked the Winter Plague, the king asked Sir Calec to investigate the matter. Sir Calec was sucked deep into a web of lies, secrets, and scandals from the lowest serf to the church and royal house. Were they dealing with a plague or mass murder? And when war loomed between his mother’s and father’s sides, where would his loyalty lie? Read Knights, Witches, and Murder by R. M. Schultz for all the details.

Knights, Witches, and Murder by R. M. Schultz is a tale of budding love, royal manipulations, magic, treachery, duty, and honor. I loved the storyline: a thorough blend of fantasy, mystery, and murder. The novel also had a historical flavor to it, and the plot was unique. Calec’s situation was a difficult one. It was like a war between good and evil with him trapped in the middle. But who made these rules of what’s right and wrong? Do we think ourselves superior to others because we practice different religions, cultures, beliefs, or ideologies? Eristin, Father Nicobe, and the likes are examples. Perhaps it’s time we understand that our strengths as living entities lie in our differences. Schultz is a gifted storyteller who wove this story to perfection. Please give us more!

Knights, Witches, and Murder is filled with fantasy and suspense. R.M. Schultz has penned a truly engaging story based on Calec, the second-born son. Even though he should have arrived first, his brother Frallec had that honor, therefore receiving his father’s legacy. Calec was sent to his mother’s family in the forest to learn the ways of witches. After all, he was the witch's son. However, after his father saved the king's son from death, Calec was reluctantly knighted and given a place in the castle. He is even betrothed to the king’s niece, Eristin. Calec’s biggest challenge is to hunt down and put a stop to the winter plague that has suddenly hit the kingdom and is killing thousands. Calec is led in circles and therefore accuses many before getting to the heart of the matter. The witch, Sirleen, helps Calec throughout his journey, but he discovers in the end that if he follows his heart, the truth of the winter plague and the person responsible will be found. What Calec does not expect is that in the end, he must make a choice. A choice between the two things he loves.

The adventure of Sir Calec is definitely a page-turning book. The author, R.M. Schultz, has written an incredible fantasy highlighting the travels, trials, and loves of Sir Calec, the reluctant knight. I found it impossible to put Knights, Witches, and Murder down. I was caught up in the storyline of Calec and the important task given to him by his king. So many have the motive, but do they have the means to create a winter plague in the Kingdom? On his journey, Calec is led from place to place, lied to by almost everyone, and finds himself jailed, not knowing whether or not his betrothed Eristin is alive or dead from the plague. Schultz’s characters are developed so well. The reader will see and understand them completely. I applaud R.M. Schultz on an incredibly intriguing story that weaves the reader into the characters' lives. Well done, well written, and I look forward to reading more from this author.

Knights, Witches, and Murder by R.M. Schultz is a combination of the fantastical with the magical and a lot of mystery thrown in for good measure. Calec has been knighted by the king to repay a debt owed to his father. His mother is a witch, and only Calec has knowledge of witches and the knighthood. The king’s sheep are found dead, their eyes hemorrhaging and their bodies covered in black rashes. When Calec is asked to find out why they are dead, he discovers humans are dying of the same thing. As he starts to unravel the clues, he asks his betrothed, Eristin, also the king’s niece, to help him, but their journey will uncover many royal secrets. Calec must choose between the two things he loves the most to save the world, a choice he never dreamed he would have to make.

Knights, Witches, and Murder by R. M. Schulz is a strange combination of fantasy and murder/mystery with a kind of fairytale coating. The plot is quite unique, and the characters are written as real people with their own flaws, people trying to better themselves by any means necessary. Death flows through this story like a river, and some are described in enough detail to satisfy you, but not so much that it becomes graphic. The action begins immediately and never lets up throughout the whole story, the descriptive writing drawing you ever deeper into its clutches. This is a great attempt at combining genres, which not many authors manage successfully, and I hope the author continues with more stories.