The Blood of the Spear 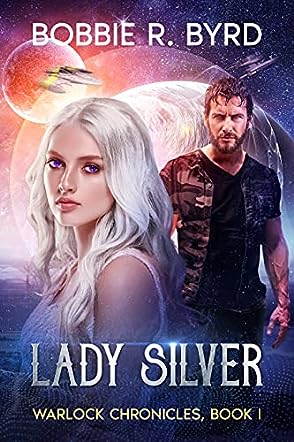 Bobbie spends her time now writing, reading, playing with her three dogs, and pondering the ways of the multiverse.

Lady Silver is the first book in the Warlock Chronicles by Bobbie R. Byrd. Set in the future where humans and warlocks despise each other, Admiral Devon Bastion is someone who follows the rules to a T. Tasked to exact punishment on the inhabitants of a certain planet, Devon finds a spaceship that enters an area it shouldn’t be anywhere near. Inside he finds the enigmatic warlock Bryanna and her android T’Laan. Bryanna is untrained yet very powerful. Her only goal is to live her life on her terms and stay away from people in general. However, things change when they discover that the world as they know it is about to end if they don’t do something. Bryanna and Devon need to work together if they don’t want the galaxy to die. But before that, Devon needs to work on his temper, Bryanna needs to take control of her powers, and the two of them have to learn to get along.

Incredible and richly detailed, Bobbie R. Byrd has done a fantastic job creating believable characters. Bryanna is simple in her approach, yet there is a lot of room to grow. At the beginning of the novel, Bryanna is a little scared, a little angry, and ready to learn what she can about her powers. Devon, on the other hand, knows exactly who he is and what he needs to do. He is a little hard on Bryanna, but he comes around in due time. The real hero of the story for me was T’Laan. The android is fiercely loyal and intelligent enough to make the reader pause and pay attention. The dialogue styles are unique to each character, the story’s development is amazing, and the world-building is imaginative yet realistic at the same time! Lady Silver is highly recommended!

Lady Silver is the first book of the Warlock Chronicles by Bobbie R. Byrd. On the orders of the hedonistic Emperor Ahlaric, Admiral Devon Bastion sets out to punish the inhabitants of the planet Myra, only to find himself sidetracked when his spaceship, the Maelstrom, runs into a seemingly rogue ship near the forbidden Well space. After taking control of the ship, Bastion takes captive a mysterious warlock named Bryanna and her loyal android T'Laan. Initially hating each other's guts, Bastion and Bryanna gradually discover they have more in common than they previously thought. As Bryanna slowly awakens her dormant warlock powers, they both find themselves embroiled in a far larger conspiracy involving High Council members, religious zealots, and the Alpha-Transcendent that threatens to destroy the fabric of the multiverse itself.

Author Bobbie R. Byrd blends the space opera style of sci-fi works such as Star Wars and Star Trek with the political intrigue found in epic fantasy series like A Song of Ice and Fire to create a uniquely ambitious saga that is sure to entertain lovers of both sci-fi and fantasy. With a fast-moving plot and distinct characters whom you either love or hate, Lady Silver is an enthralling page-turner that you don't want to put down. I had an absolute blast reading it. The dynamic between Bastion and Lady Silver forms the core of the narrative. For some reason, Emperor Ahlaric reminded me of King Joffrey Baratheon from Game of Thrones. If an epic space opera filled with romance, action, and political intrigue piques your curiosity, get yourself a copy of Lady Silver from the Warlock Chronicles.

Lady Silver: Warlock Chronicles, Book I by Bobbie R. Byrd is a brilliant contemporary space opera mixing science fiction with fantasy. On the tech side, you have Admiral Devon Bastion, who takes orders from Emperor Ahlaric, a despotic ruler that makes Caligula look benign in comparison. Bastion executes wielders of magic known as warlocks because his emperor has a deep-seated hatred for them. On the magic side, you have Bryanna D’Isaac, whose rogue ship strays close to the forbidden Well Space. With her android T’Laan, Bryanna is captured by Bastion, who is supposedly on his way to inflict a scourge on the inhabitants of the planet Myra. As they belong in opposite camps, they hate each other and what each one stands for. In the process of her detention, she gets to know Bastion more and more each day while her warlock powers are beginning to manifest.

I want to say so much about this story, but if you have read enough tales about the clichéd boy meets girls where they hate each other in the beginning and manage to settle their differences to face a larger conflict together, then I strongly suggest you read this story to see how well Bobbie R. Byrd puts a unique twist on that tried and tested formula. Lady Silver is written with fascinating characters, high imagination, and pays homage to classic space opera tales. As for the romantic angle between the admiral and Bryanna, I am guessing that Byrd will better explore the possibilities of this relationship in her next installment. There are enough unanticipated scenes in this novel that will appeal to both science fiction and fantasy fans. It has a storyline spun with tenacity, and this is what you want in your space opera.