Look for Me Under the Rainbow 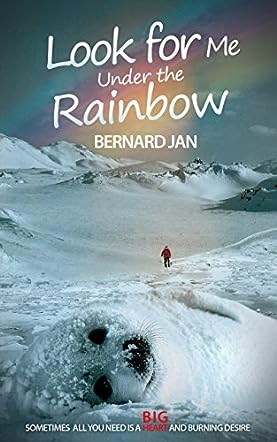 Bernard Jan is the pen name of an author, a novelist and a poet. In his lifespan he has written and published five novels, two novellas, one book of poems and an essay in Croatian. Four of his manuscripts, together with his book of poems, are translated into English.

A World Without Color, a short true story of the last three days with his cat, and Look for Me Under the Rainbow, a short story which in a unique and gentle way sheds light on the plight of harp seal pups in Canada and warms the hearts of young adult and other readers concerned about our planet and its treasures with the idea that change is needed, change is possible, and change will come, are his two titles currently published in English.

Bernard Jan is also an animal rights advocate and environmentalist. As part of his animal advocacy activities, he had the great honor and pleasure to translate Eternal Treblinka: Our Treatment of Animals and the Holocaust by Charles Patterson into Croatian language.

Look For Me Under the Rainbow: A Novella by Bernard Jan is a beautiful story that speaks about the importance of protecting the treasures of planet Earth and thereby saving the environment. Danny, a harp seal pup, looked at the vast expanse of water stretching out endlessly between the giant icebergs. His mother told him he was too small to go swimming and Danny understood that it was dangerous for baby seals in the water. His mother told the story of the Big Seal and about the Big Land where there were more seals. She also told him about the multi-colored rainbow that appeared after icy rain and how it disappeared. She told Danny to be careful of the dangers lurking around them. Will Danny run into the most dangerous of them all, Man, and see the ice become red?

Set against the backdrop of glaciers, ice, and seals, the book introduces readers to the Rainbow Warriors, an environmentalist group whose mission to save animals takes them to Greenland, the land of snow and ice. The book will make readers respect animals and help them realize how important it is to live with animals in peace. Helen, through her work with the Rainbow Warriors, exposes the cruelty and brutality of the humans who try to kill these seals. It is a beautiful story that will tug at the hearts of all readers who love animals and who want to protect them and the environment. Danny's character is memorable and he will leave a mark in the hearts of readers long after they finish the book. Helen's love and compassion for animals are palpable and many readers will be able to connect with her feelings and love towards animals. The book also captures the beauty of Mother Nature in many ways, inspiring readers with a longing to protect the planet.