Not Without a Fight 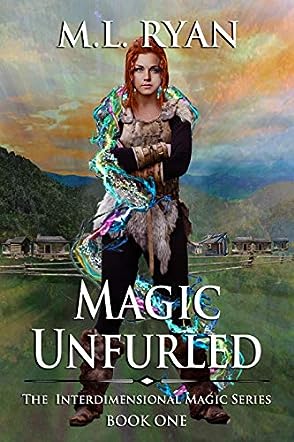 Magic Unfurled by M.L. Ryan is a fascinating and entertaining urban fantasy novel. This is a world of the Haves and the Have Nots--those with magic powers who rule with an iron fist, and those with very few magic powers that are ruled by those warlords. This story centers around one of the Have Nots, named Kya, but that isn't the only disadvantage. The other is, she's a woman, but this is where the story gets even more interesting. From the time she was eleven years old, she's had to fend for herself, stealing food just to survive. Since women are on the lowest rung of the ladder in the land, she passes as a boy, and it works for her. When Kya is taken by a gang of warlords to their camp, she discovers that she has magic powers she didn't realize she had. And in this world, magic is power.

This book is full of drama, clever humor, and interesting characters, especially Kya. The award-winning M.L. Ryan has crafted a world and a plot that you'll love to lose yourself in, with charismatic Kya leading the way. The character of Kya is strong enough to lead you through chapters and storylines that enchant and impress. There is a good balance of action, drama, and humor, and the first-person POV makes the reader's relationship with Kya even more personal. I like that the story gets into the meat of things on the first few pages, and before you know it, you're deep into the plot. The author's worldbuilding skills are amazing, and the attention to detail adds so much texture and volume. I appreciate that Ryan doesn't talk down to her readers, and has an inviting, earnest style. There are some sex scenes that add energy to the story as well. By all means, grab Magic Unfurled by M.L. Ryan the first chance you get.