From Cubicle to Cloud 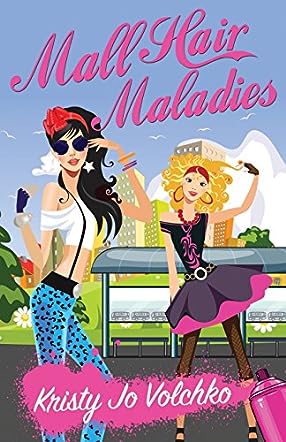 KRISTY JO VOLCHKO is the author of the children's adventure series Cackleberry Creek, which includes such titles as, Frogs Can Fly, There Are No Monsters at Cackleberry Creek, The Clubhouse Cabobble, and Operation Scrub-A-Dub Skunk.

A multi-genre author, poet, blogger, and reviewer, she began writing stories as young as eight years old and has since penned numerous books, short stories, and poetry anthologies that have become popular around the globe. Kristy lives in Pittsburgh, Pennsylvania, where she continues to share her love of storytelling.

“What inspired me to write Mall Hair Maladies had everything to do with being an 80s child. How wonderful it was to be present for the first days of MTV, new wave, techno, glam-metal, Steven Spielberg and John Hughes films, Saturday morning cartoons, bubblegum comics, Happy Meals, and cereal box toys! Witnessing the emergence of dynamo artists like Prince and Madonna arrive fresh on the music scene, evolve, and reinvent themselves time and again is downright awesome. One of the many things that makes the 80s so phenomenal is that all the art/music/literature from that era is still as great as ever! Writing about that colorful, adventurous, unforgettable time makes me smile, and hopefully, it will make others smile too.”

Mall Hair Maladies is a young adult coming of age novel written by Kristy Jo Volchko. It was 1985 and, as far as thirteen-year-old Tanya was concerned, Pittsburgh was the center of the universe. She was in the eighth grade now, the last year of junior high, and next year she’d finally be there -- in high school -- where she’s heard that life really begins. For now, life was still pretty sweet. Earlier that year, Randi, a new and very cool girl from New York, had transferred into Seaton Junior High, and the principal had asked Tanya to give her a tour of the school. Randi was her sister from another mother, her complement. They both liked the same things, had incredible skill with fashioning the perfect hair-do and adored Madonna. Both girls came from single parent homes; Tanya’s mom was an environmental lawyer, and Randi’s dad owned and operated a nursery in town. Sometimes, Tanya wondered what would happen if their parents happened to meet… For now, though, the big excitement was the upcoming Madonna concert, and the contest a local radio station was holding to give out free tickets. Tanya knew they would get the tickets; they only had to be caller number ten once, and those tickets would be theirs. Yes, life was very cool.

Mall Hair Maladies is a gauzy and hilarious celebration of all things eighties as seen through the eyes of two thirteen-year-old girls. If you didn’t grow up in the eighties and have always wondered about the big hairstyles you’ve seen in the old class yearbooks and movies from that decade, you’ll delight in the step-by-step instructions Tanya follows to get every inch of hair teased, puffed up and lacquered in place before she leaves the house. I loved this book! While the story is about two young girls, and there is a fair amount of print devoted to fashion, hairdos and other girly stuff, there’s a much deeper, stronger thread running through Mall Hair Maladies. Coming of age stories can be run of the mill, or they can have the potential to achieve greatness -- more so, I think than any other fiction genre can. I always get a tingle, a feeling of excitement, of possibility, when opening a coming of age book. Think Huck Finn or the Outsiders or any one of the classic tales that fit the genre and make it special. That special something, the special sauce as it were, also makes this book rock. We transcend the hairspray and glitter and witness the unforgettable magic, adventure and mystery involved in attaining adulthood, in coming of age, seen here most vividly during Tanya and Randi’s concert night. Volchko’s characters are marvelous, and their escapades work so very well. Mall Hair Maladies is most highly recommended.

Mall Hair Maladies by Kristy Jo Volchko is a retro comedy set in 1985. New girl Randi Gattano is taken under the wing of Tanya at her new school and it doesn’t take them long to strike up a friendship. They have so much in common – the big hair of the '80s, the ambitions, the dreams, boys, and Madonna. When they find out that their idol has scheduled a concert in Pittsburgh, their own hometown, they will do everything and anything it takes to get tickets for it. One thing after another stands in their way but nothing is going to stop them and hilarity ensues – along with a few valuable life lessons.

Mall Hair Maladies by Kristy Jo Volchko took me back in time to an era I remember only too well. It brought the 1980s back to life for me in vivid colors and a whole heap of memories, some I would rather have forgotten! This is one of those rare real laugh-out-loud stories that will have tears running down your face. I think that many of today’s youngsters will struggle to understand the humor here because things have changed so much, but they will see that the pains and the laughter of growing up are still there for teens. As well as a hair-raising hilarious tale, we also have a story that is grounded in reality, in life’s little lessons that we must all learn about friendship, values and family, and how they bond together to form the backdrop of our lives.

This story was written so well with fabulous characters that many of us will certainly identify with, even in some cases as ourselves. It’s a page turner, plenty of action with something new happening almost on every page, and I can only describe it as a romping good read. The ending? You won’t see it coming, I guarantee you. A real blast from the past that I thoroughly enjoyed.

The 1980s was a time of big hair, shoulder pads, leotards, jazzercise and get fit videos, well, that’s certainly how I remember it, but for two young thirteen-year-old girls in Pittsburgh, it was their time of coming of age, of discovering who they were and what really mattered to them. Randi and Tanya were absolute BFFs (best friends forever) and the one thing that bound them to each other, more than anything else, was their love of music. But more important was their complete and utter devotion to their number one cultural icon – Madonna. When Tanya realises that Madonna will be performing live at their local Pittsburgh arena, attending her concert becomes the be all and end all of these two young ladies’ lives. In Mall Hair Maladies, Kristy Jo Volchko brings us a story of friendship, love and - perhaps most importantly - hair, the one feature that '80s girls used to define their generation.

As far away from a teenage girl as it is humanly possible to be, I found Mall Hair Maladies to be an absolute breath of fresh air among the usual murder, destruction and despair that frequents most of the books I read these days. Author Kristy Jo Volchko has set out to capture the spirit, the determination and the maturity of young people and she has done it beautifully. It would be easy to dismiss the characters as frivolous teenagers with little or no responsibility, but Volchko beautifully crafted into the story some meaningful and deeper reflections on life, on karma, and most especially on friendship and what it means to be a true friend. I absolutely rode this fun tale all the way and although not a child of the eighties myself, I could see a lot of my own teenage years in their crazy adventures and their determination to do what they wanted to do. This is a wonderful book for young people especially, but also for those of us who are young at heart and tired of the continuing negativity that surrounds us in media, in film and in literature. Like Madonna, this book sings from its own song sheet and for that alone I can highly recommend it.