by Robert A. Valle 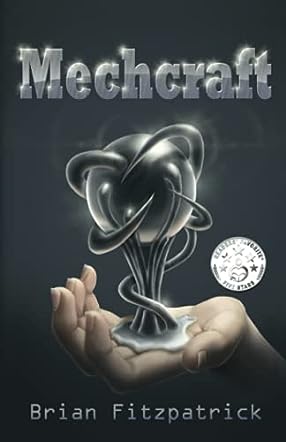 Brian Fitzpatrick is a 5-time award-winning author and screenwriter.

Imagine being just 7 years old and accidentally watching the horror classic, Night of the Living Dead. For author, Brian Fitzpatrick, that’s precisely what happened. It became the catalyst for a life-altering path forward. After a week of sleepless nights, he became fascinated with the idea that he could be so scared, yet be perfectly safe. Fitzpatrick swiftly put pen to paper and has been creating horror and science fiction tales ever since. As an adult, Fitzpatrick investigates the paranormal with his team of ghost hunters, keeps current with medical technology for his business career, and has spent a lifetime weaving imaginative stories for table top role-playing games. Fitzpatrick grew up absorbing Steven Spielberg, John Carpenter, George Lucas, Stephen King, Anne Rice, and Clive Barker.

He then converted his most popular screenplay, Mechcraft, into a novel. Inkshares published the book in February of 2018. Soon after the release, the Mechcraft novel went on to place quarterfinals in the 2019 Screencraft Sci-fi/Fantasy Novel Contest.

Mechcraft by Brian Fitzpatrick is a young adult science fiction novel that centers on the life of Jake, a teenager whose life is forever altered by a physical condition passed down from his parents. With little time to understand what is happening to him, he must come to terms with the consequences of his parents’ past and his role in changing the world. Yet, there are those who wish to destroy him or, worse, control him. Can he survive and learn to use his new abilities before his will is broken, and what about his family and his friends? How much would he lose along the way? And what about Bex? Is he willing to lose her too or would that be more than he could take?

When science goes too far... This is the basis of many science fiction stories, and Mechcraft by Brian Fitzpatrick is no exception. In this book, the author creates a riveting tale driven by fear, hope, twisted beliefs, and a dark, religious fervor. It raises the questions of how far humans will go in the quest for scientific advancement, and what darker deeds are we willing to do to control it. Brian Fitzpatrick creates a fascinating world that is tantalizing and difficult to leave behind. Through the merging of nanotechnology and humans, he builds a story that is beautiful in one instant and akin to a horror movie in the next. Mechcraft is vibrant and filled with action yet goes deeper into the human soul in the true tradition of a great science fiction story. Well done!

This is a very enjoyable read! Fast-paced from the very beginning! Fun, action-packed and at times a bit disturbing....Damn Good!