Memoirs of the Mausoleum 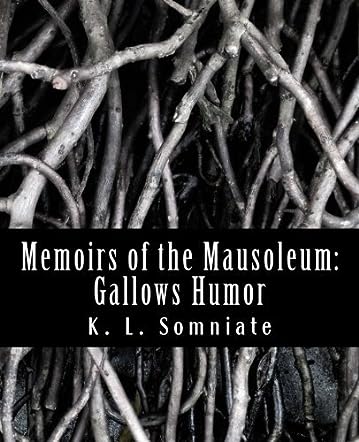 I would like to save my pretentious, self-indulgent, self-absorbed prattling for my books, thank you very much. There's nothing interesting about me, or at least, nothing relevant that I feel like sharing. I was born, I am living, and I will die. All I can hope is that I can be entertaining along the way.

Memoirs of the Mausoleum: Gallows Humor by K.L. Somniate is an intense and dark tale of an undead being and a human, who share a connection that goes beyond common sense. Revenants were once humans, but when they died where ghosts reside, they are resurrected and given powers beyond the control of anyone. The only way to control them is by placing them in a Mausoleum where they are contained to aid scientific research. All the revenants in captivity have to fight death matches for this purpose.

An intern, Roman Sheer, was searching for a purpose in life, so he joined this world. However, he got more than he bargained for when he comes into contact with Revenant 10, the undead being who is uncontrollable and extremely violent. He claimed the lives of several employees, but spared Roman. When Roman is assigned Ten’s case, he discovers that they have a connection, but there is a catch. Roman cannot remember it. There is a lot more to the world of the undead than meets the eye. Can Roman discover his past and protect his sanity at the same time?

I must make it clear that horror is not really my cup of tea or the genre of my choice. It is way too intimidating for me, but there was something about this novel that grabbed my attention. So I started to read it, and once I started, I could not stop myself. The story is very thrilling and invigorating. You cannot help but be sucked into this twisted world where the writer makes you a part of the team. The word choices, the atmosphere, and the characters were very strong. This is how horror should be written. Definitely a five-star novel!