Protectors of the Light 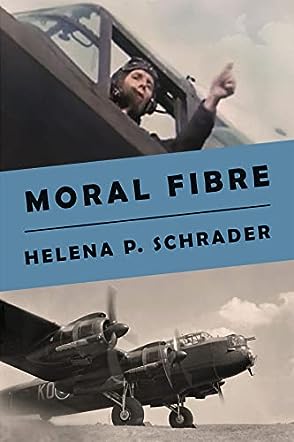 Moral Fibre is Helena P. Schrader's sequel to Lack of Moral Fibre about Flight Engineer Kit Moran, already a survivor of thirty-six missions, the last being a raid on Berlin that killed his best friend and skipper. He then refuses to fly on his thirty-seventh, facing the dire consequences of being posted LMF or Lacking in Moral Fibre. After a review, it was determined that he was not psychologically deficient and was given the chance to return to duty. Now, in Moral Fibre, we find that Flying Officer Kit Moran has earned his pilot's wings and the story deepens as he faces the challenges of advanced schooling and command. The fact that, while still a flight engineer, he had refused to fly does not help. Neither does it help that he is in love with his dead friend's fiancée, Georgina, who is kind and friendly toward him, but not prepared to become romantically involved again.
The story moves from the high drama of aerial combat, complicated assignments to dangerous missions, and evolving professional relationships, to the equally high drama of falling in love, family entanglements, and a mysterious family history. We follow the wartime lives and experiences – and growth – of both Kit and Georgina as they inexorably merge. The action is constant, the tension palpable, and the outcomes never predictable.

As I began to write this review I was awestruck by the credentials and the work of Helena P. Schrader, who as I've written before, is a true master at delving into complex psychological dilemmas and emerging with a tantalizing, completely comprehensible tale of human frailty and strengths that blend into a unique experience for her readers. Moral Fibre is brilliantly crafted in its delicate treatment of an evolving relationship, based first on tragedy for both Kit and Georgina, and then on the complexities of relationships within their individual careers, one military and regimented, the other becoming a teacher, and the clashes with staid tradition and prejudices. How they each evolve is the meat of Schrader's magic. The relationship and romance scenarios are poignant and human, contrasted with the battle scenes and flying sequences which are accurate and detailed.

Wartime fighting, technically and psychologically, has been meticulously researched and presented. The unique British flight regimens of World War Two, its technical elements of aircraft and armament, and its dangers and personal challenges are brilliantly recorded and molded into an edge-of-the-seat tale. As a reviewer, I was more than normally drawn to this work. First, as a writer myself of military scenario historical fiction, but then more closely because I am a Veteran of the US Air Force, a flight crewman from a bygone era of radial engines and open hatches with the scratchy intercoms and the smell of exhaust and sweat. Also a private pilot and active in a worldwide organization that preserves and flies warbirds from the era Helena P. Schrader records. You see why I am totally invested in her elegant work with Moral Fibre and thankful to be able to say here that my recommendations come no higher than the highest I know how to offer.

Allow me to close with Schrader's own words:
"Riding the icy, moonlit sky they took the war to Hitler. Their chances of survival were less than fifty percent. Their average age was 21. This is the story of just one Lancaster skipper, his crew, and the woman he loved. It is intended as a tribute to them all."

Moral Fibre: A Bomber Pilot’s Story by Helena P. Schrader is a continuation of the story of Flying Officer Kit Moran, who had been classified as LMF (Lacking Moral Fibre) after the death of his best friend and skipper Don Selkirk, following a raid over Europe, while Kit was a Flight Engineer on the Lancaster Bomber. Kit had refused to fly just a few hours after his friend had guided the Lancaster back to base but was found to be dead at the controls. After being declared not mentally disturbed by the doctors, Kit was given a second chance and offered the opportunity to learn to fly and return as a Lancaster pilot, in the future. Feeling he owed the debt to Don, Kit jumped at the opportunity, especially since pilot training would be in South Africa. His missionary parents were stationed in Nigeria and training in South Africa would give him the opportunity to see them again. As Kit begins his new career as a Lancaster pilot, he must begin to understand and come to terms with the idea of being a leader of men and making tough, split-second decisions that can affect the lives of many. Also, he begins to understand that he has feelings for Georgina Reddings, his former skipper’s fiancée, who has been nothing but supportive of him since his classification of (LMF). He is afraid to tell her of his love for fear of putting her through the same grief she went through when Don was killed. Pilot Officer Moran is convinced he will not survive this war and he has no right to hurt Georgina all over again by getting himself killed.

I was fortunate enough to have read the first installment of Kit Moran’s story before reading Moral Fibre but I can assure readers that this iteration stands perfectly well on its own. Author Helena P. Schrader does a superb job of outlining the history that leads up to Kit being discharged from the assessment center and certified as fit for training as a pilot. The style of the narrative beautifully combines a sweet, romantic love affair, amidst the horrors of war, coupled with a detailed narrative of life aboard a Lancaster bomber. This is especially perilous for Kit Moran and his crew as they were chosen to be one of the few who were selected to join 617 Squadron, colloquially known as “The Dam-busters”. Because this particular squadron was often pressed into use when the targets were the hardest to reach and breach, plus the most highly protected by flak batteries and enemy fighters, life for the aircrew of these planes was perilous, to say the least.

The author wonderfully combines the fear and courage of the airmen with the fortitude, dedication, and love of those left behind to create a story that is so much more than a straight war story. The thoughtful conversations between the members of Kit’s crew and between Georgina’s minister father and Kit were very much a highlight of the story from my perspective. I particularly appreciated how the Reverend’s faith was challenged by the atrocities committed during the war, particularly by, but not limited to, the Nazi regime. This gave the entire story a well-rounded and well-thought-out dimension that many war books lack. I loved this book and place it extremely high on the list of books I have read this year. I can highly recommend this read.

Moral Fibre: A Bomber Pilot's Story by Helena P. Schrader follows the journey of Flying Officer Kit Moran. After the death of his skipper and friend Selkirk, Kit struggled with getting back into a plane and serving his country. Posted LMF (Lacking in Moral Fibre) or labeled as a coward in simple terms, Kit’s biggest challenge was to prove he was worthy of his position as a flight engineer. Dr. Grace believed Kit was ready, but Kit was skeptical. However, before he could get back into action, he needed to figure out a few things, especially his unresolved romantic feelings for Georgina. It was all about raising his morale and joining the other men to serve his country. But was Kit ready for it? Or was he making the biggest mistake of his life?

In Moral Fibre: A Bomber Pilot's Story by Helena P. Schrader, Kit was conflicted about getting back to duty, to say the least. Getting the seal of approval from Dr. Grace was a great feeling, but the uncertainty settled the moment he boarded the place wearing an RAF uniform. From there on, Kit struggled with accepting his survivor’s guilt, that his feelings for Georgina might never be reciprocated, and he needed to get back to his job before he lost everything. Kit was a soldier first and foremost. It took him a long time to realize it, and when he did, he accepted his job with valor and respect. The narrative was intense, the story was packed with action, and the author made sure every relationship had a chance to bloom naturally. The dialogues were fun, and the descriptions were vivid. What else could a reader want?