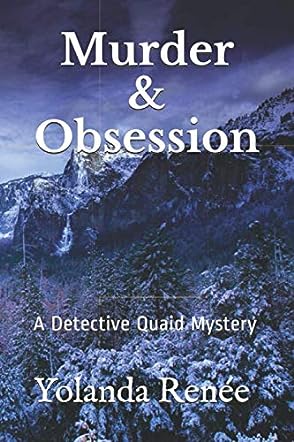 t one time Alaska called to me and I answered. I learned to sleep under the midnight sun, survive in below zero temperatures, and hike the Mountain Ranges. I've traveled from Prudhoe Bay to Valdez, and the memories are some of my most valued. The wonders, mysteries, and incredible beauty that is Alaska has never left me and thus now influence my writing.

Despite my adventurous spirit, I achieved my educational goals, married, and I have two wonderful sons. Writing is now my focus, my newest adventure!

The wilderness of Alaska is the setting for the third mystery novel in the Detective Quaid Mysteries, Murder & Obsession by Yolanda Renée. An Anchorage detective, Steven Quaid, renovates his wilderness cabin into a honeymoon retreat, preparing to bring his new bride, Sarah, there for a quiet honeymoon. After his work was complete, he set off on a hunting expedition. Upon his return, it appeared a murder had occurred in the cabin, and Sarah was missing. Being the primary suspect, Steven flees and the adventure begins. Not only does Steven have to fight the weather, wild bears, injuries, hunger and thirst, he is on a quest to find his beloved. Steven finds aid through the support of his uncle, and eventually his friends on the police force.

Murder & Obsession by Yolanda Renée offers many thrilling and suspense-filled moments. The reader becomes part of the breathtaking adventure, never quite sure which characters are on the side of honesty and justice, and which ones are corrupt and vicious. Ms. Renée presents a cast of many characters, some with dubious motivations and others with unwavering integrity. But, it is not always clear in which category some of these characters belong – making for an intriguing story. The romance of Steven and Sarah has not been a smooth road, and there are references to earlier times. It seems that reading the books in this series in order may be advisable, so that the history of their relationship is known. The many twists and turns in this novel create an enjoyable and entertaining read.