Writing Through the Muck 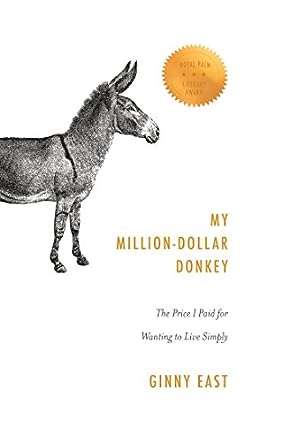 Starting with a bit of back story here, Ginny East lived in Florida, running a successful dance studio, as well as owning property. She married Mark, handsome and six years her junior, who became her partner and fellow dance instructor. Two areas of unhappiness eventually collided. Mark was resentful that he was a junior partner in the business, dependent upon Ginny for every dime, and Ginny began to feel that her family was splintered into separate directions, what with the business to run, the kids' school and their after-school activities. Ginny crunched the numbers and realized that they could cash out everything and retire as millionaires. Ginny and Mark decided to do just that, moving the family to a dilapidated cabin in a tiny town in the state of Georgia. Years earlier, Ginny had met a donkey, and it was partly this meeting that fueled the idea of living in the country and buying herself a donkey. The connection to that donkey long ago triggered the story that eventually became My Million Dollar Donkey: The Price I Paid to Live Simply.

Embarking on their new life in the country, Mark, always peevish, demanded that he become the man of the house and take over the finances. Ginny was tired of that responsibility and gladly signed everything over to him. Mark's true levels of selfishness were free to come out and play, backed by a huge bankroll. The more Mark spent on himself, the more Ginny hoped that her marriage to a younger gigolo would somehow work out. Whenever it was time to revisit this fantasy, Ginny developed another farming hobby or bought a different species of animal to tend. The family's ignorance about farm life was terrifying.

Ginny East tells her own story, documenting her twenty-year marriage and its eventual train wreck, in her memoir My Million Dollar Donkey: The Price I Paid to Live Simply. The book is a sad story, but like every other train wreck, I couldn't look away. Ginny East's desperate loves for her children, her animals, Mother Earth, and above all, her husband, were the driving forces of My Million Dollar Donkey. Ginny's story is unforgettable.