The World Does Not Revolve Around Curmudgeon Avenue Tiny and the Boy Who Loved Her A Jew's Search for Truth, Meaning, and Hope in the Muslim World
by David Eden
Non-Fiction - Memoir
Kindle Edition
Reviewed on 06/12/2018 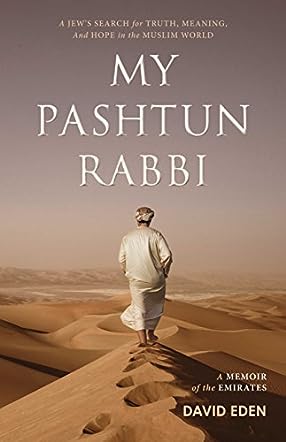 David Eden, a veteran journalist, was an Emmy Award-winning Managing Editor and Executive Producer at Cleveland's CBS TV station and the former Editor-in-Chief of the Cleveland Free Times. He has worked as a top-level editor, columnist, and critic for the Dallas Times Herald, Detroit News, The Minneapolis Star, Cleveland Plain Dealer, and Albuquerque Journal. His work has appeared in The New York Times, The Hill, Jerusalem Post, and The Times of Israel, among others. He was the Chief Administrative Officer of Hillel International and has taught journalism at John Carroll University and United Arab Emirates University. Eden is a graduate of Miami University and earned his M.A. from the University of Missouri School of Journalism.

My Pashtun Rabbi: A Jew's Search for Truth, Meaning, and Hope in the Muslim World by David Eden is a book that takes a completely different look into the Muslim world. While most writers show a side of the Muslim world that the propaganda media portrays, David Eden shows a more human and more realistic side of this religious community, one where there is acceptance, love, friendship and peaceful coexistence. He tells his story without meaning to sway the reader, but to show the other side of the picture so that people can understand that there is still hope and trust left in this world.

Going through a divorce and with his son already in college, David is given the opportunity to teach at a prestigious college in the UAE. He enters one of the biggest and most powerful Islamic countries in the world, hoping never to disclose the fact that he is a Jew and just do his job. However, fate has other plans for him. Little did he know that on one fateful day a taxi driver named Noor from the northern part of Pakistan would open doors for him to understand Islam, the culture of the country and how the people live. He got to see humans, not just a religion, and to understand that, deep down, everyone craves just one thing: acceptance.

What I truly enjoyed about this book was how the author conveyed his message without enforcing his ideas. I absolutely loved that David talked about people; humans who have feelings. He talked about people without labeling them with anything and it showed that he really gave people a chance to show their true worth to him in his interactions with them. He does not take any sides, he just shows what he encountered and how he felt when he met people like Fatima and Noor, both struggling in their own way to find a better future. The narrative is very strong and the way it is written made the story even more interesting for me. This is a truly exceptional and wonderful book that I would love to read again.

My Pashtun Rabbi: A Jew's Search for Truth, Meaning, and Hope in the Muslim World by David Eden is a memoir of David’s experiences in the UAE as a Jewish man. My Pashtun Rabbi tells the story of David, a journalist, in his own words when he decides to experience a different life on a different continent in the midst of his divorce in America. His son is already in college and David is ready to try something drastically different and so he accepts a job teaching in the UAE. He thus narrates his experiences of the country and its culture, how religion and Islam play a central role in everything, his own identity as a Jewish person which he avoids disclosing if he can help it, his close friendship with one of the most affluent and powerful families through one of his students, and most of all, his deep friendship and almost spiritual relationship with Noor, a Pashtun from Waziristan, the tribal area around Pakistan and Afghanistan, who is his taxi driver and one of his closest friends.

My Pashtun Rabbi is a very engaging book, as one would expect, since it is written by a professional. More than that though, for me it is the subject matter and content that make it interesting and fascinating. It provides a closer look into a modern UAE, with its supreme oil wealth and affluence in the cities, alongside the tribal traditions and the poverty of the expat population from less developed nations who come here to earn a better living, among other things. I found the up-close look at the lifestyle full of camel racing and expensive cars, etc. to be all I had heard about. It was also very interesting and almost educational to hear of David’s perspective from the point of view of his religious identity of being Jewish in an Arab land. The one thing I do wonder about is, if David’s perspective was naturally—and understandably— limited with respect to female life in the Arab/Islamic countries. Although Fatima’s family seems exceptionally open-minded and progressive, the fact is there is systematic oppression of women in Arab countries of which there is little or no mention in the book. But that cannot be held against David since he naturally would not have free access to the women’s world and their true, inside stories and it is something only a woman would be able to do. Leaving aside this fact, the book is still thoroughly interesting and I liked learning more about the UAE in general and Yemen through this book.

My Pashtun Rabbi: A Jew's Search for Truth, Meaning, and Hope in the Muslim World by David Eden is the author's memoir of life in the United Arab Emirates, teaching journalism in the women's sector at a university in Abu Dhabi. Eden describes the decision making process and the initial confusion. "More pressing to me was the question of whether I had a future. It involved an unsigned contract and a promise of physical comfort, but I had no idea what I was getting myself into this time." As Eden dives head first into what could certainly be very shallow water, he is immersed in a world so foreign that the obstacles are both terrifying and comical. The hurdles relate to virtually everything, but as Eden finds his way (home, initially, as he's on the brink of abandoning the post), he meets an unlikely friend to help navigate the maze, finding more than just a lucrative job and something to fill his time in the vast desert... Eden, an American Jew in the Middle East, finds himself.

My Pashtun Rabbi is a fantastically engrossing autobiography that digs far deeper than any I've read before. David Eden's writing style is reflective of his journalistic acumen; a delicious balance of credible and authentic first-hand experiences with the personal insight only a man who has wandered the desert could provide (a man who isn't Moses, of course). There is something of a slow awakening in this book that I found intriguing. Wrapped up among observation, humor, and a descriptive narrative, Eden peels back the layers with unexpected restraint and emerges with a restored sense of purpose and self. It's inspiring and eye opening, with all the right components to keep a reader furiously turning the pages, and ending on a note that kept me thinking long after I set the book down.

My Pashtun Rabbi: A Jew's Search for Truth, Meaning, and Hope in the Muslim World by David Eden is a memoir of David’s experiences as a Jewish Clevelander in the United Arab Emirates. On the brink of the Great Recession, David accepts an opportunity to be the "journalism expert" and teach at United Arab Emirates University. Over 7000 miles away from home, fate quickly finds David in the form of a unique friendship with Noor, a Pashtun taxi driver from Waziristan (the tribal area around Pakistan and Afghanistan) and David is forever changed. David beautiful devotes his memoir to his adventures educating his students and learning from Noor as well as the Falahis, a prominent and wealthy family in the UAE.

A sincere and authentically funny tribute, My Pashtun Rabbi is one of those books that feed your soul. Whether you are a Jewish American, an American Jew, or an American and a Jew, you realize My Pashtun Rabbi is the book you have been desperately needing to read. It is the book that you have been searching for that sneaks deep into your subconscious so much that you'll find yourself telling David Eden's story as if it were your own. David's challenging relationship towards his Jewish identity, country, and Israel not only feels familiar but necessary.