Mylee In The Mirror 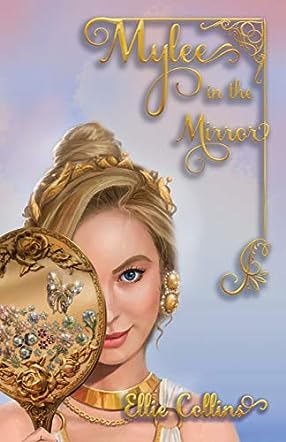 Ellie Collins wrote her debut novel, Daisy, Bold & Beautiful when she was turning eleven and just beginning sixth grade. She finished writing Mylee In The Mirror, the second in her multi-award-winning middle-grade Greek mythology series before heading back to school for seventh grade and turning twelve and Mad Max & Sweet Sarah before eighth grade and becoming a teen. She writes amid a very busy extracurricular schedule, including a spot on both a gymnastics team and a trampoline and tumbling team, as well as taking weekly piano lessons. She's an avid gamer who loves hanging out with friends. Her love of Greek mythology inspires her writing.

Life is complicated when you're a teenager. It is full of ups, downs, and discovery. If one of those discoveries happens to be an item belonging to a goddess, then that's a whole new Pandora's box. While helping her Grammy relocate, Mylee came across the most beautifully crafted mirror and, while gazing within, discovered a person who was perhaps as much in need of Mylee's help as her own parents were. They were going through a rough time, and her mum seemed to want to live through her, even if it meant forcing her to make the same mistakes she had. Fortunately, this teenager has her head on her shoulders and a network of friends who, despite their ups and downs, have each other's backs in Mylee In The Mirror by Ellie Collins.

I really loved the dialogue; it was fresh, real, and bursting with life. The dialect was a real enhancement to an already crisp narrative that was true to the character's emotions and age. I was instantly pulled into the story and adored how the personalities of each character, when told from their perspective, remained true to them, while also injecting fun and their own inner thoughts into the narrative. The characters are strong, vivid, and full of depth. I found myself chuckling numerous times at some of the quirky phrases or behaviour that I can easily relate to my own teen years. There is some sage advice to any teenager or even adult. I thought Grammy's character was brilliant. She is a kind, firm, wise woman and mentor, much like my own Nan was for me. Mylee In The Mirror is a really great read and I wouldn't hesitate in picking up another book by Ellie Collins. I enjoyed it from the first line to the last, and found it to be beautifully edited.

Mylee In The Mirror is a mythological coming of age story for children and preteens written by Ellie Collins. Mylee had been helping her mom and Grammy Jean pack up Grammy’s belongings when she came upon a box in the attic that was filled with hand mirrors. Grammy Jean chuckled a bit as she recalled her efforts to find interesting hand mirrors for her collection. She and Grandpa Doug would comb the garage and yard sales, he for his books and she for her mirrors. Grammy Jean was now moving from her house to a retirement home, something that Mylee felt badly about. Visiting Grammy Jean in this house had been an integral part of growing up. Sure, she could still take a bus to go see Grammy Jean at the Kirkland Heights Retirement home, but she wasn’t at all sure it would be the same.

Grammy Jean suggested Mylee take the hand mirrors home with her as she would have no room for them in her new apartment. Mylee could see what she wanted and donate the rest to Goodwill. When Mylee finally had the time to rummage through the collection, she found some definite keepers and others she could live without. Then, at the very bottom, she found one that made her gasp in awe. It was made of gold and encrusted with all manner of precious gemstones. She carefully turned it over to look at the face of it and was stunned to see a beautiful woman staring rather crossly right back at her.

Mylee In The Mirror is a well written and imaginative story about a magical mirror that links a young teen with a goddess. Collins’ story is a marvelous introduction to myths and legends for young readers, but there’s also a number of social issues that the author addresses in her tale. Mylee’s mom seems to want to live her dreams through her daughter and has problems recognizing and respecting Mylee’s own skills and talents. Mylee’s mom and dad are also having relationship issues, leaving their daughter feeling isolated and uneasy. Then there’s the boy issue -- Mylee is really not all that ready to date the big football hero; she’d much rather hang out with her friends, but she’s not quite sure how to get out of a commitment she never really made. Collins’ plot is engaging and fun to follow, and her characters are credible and well crafted. Mylee In The Mirror is most highly recommended.

Mylee is a very caring, sensitive teenager. She enjoys spending time with her Grammy and is thrilled to be given a box of exquisite mirrors that she discovered in Grammy’s attic (after doing battle with the big ugly spider) while helping pack Grammy’s things to move her into a retirement home. At the bottom of the box of mirrors is a very special mirror, which isn’t a real mirror in the traditional sense of the word. And there’s someone inside the mirror, someone who shares Mylee’s dilemma over her mother, boys and whether or not she wants to be the prom queen. Mylee’s parents are going through difficult times and her mother wants to relive her own cheerleading high school adventures and the love that she found on the football field. But Mylee can’t live her mother’s past life. She has to live her own. And she has some very difficult decisions to make regarding the people she cares about, both at home and at school.

For a young writer, Ellie Collins has an incredible sense of adventure and the power to use the written word to develop a compelling plot. Her command of language is incredible. Her novel, Mylee In The Mirror, isn’t her first. And hopefully, it won’t be her last. Geared towards the late Middle Grades, early Young Adult age group, the story discusses issues relevant to young people today. Mylee is a strong character, one that everyone would be proud to call their daughter, their granddaughter or even their friend. She is presented with some difficult choices to make and she manages these difficulties with an air of grace and determination. Mylee In The Mirror is a wonderful story for teenage readers, written with passion by a teenager. I look forward to many more stories by Ellie Collins.

Mylee In The Mirror by Ellie Collins begins with Mylee's grandmother moving from her house to a retirement home. When Mylee finds a box containing a collection of mirrors, she shows them to her Grammy, who politely gives them as a gift to Mylee. Mylee finds a beautiful mirror in the collection that is like no other. Mylee has a small circle of three best friends as they begin their freshman year of high school. Lilith, Serena, and Tyler, her best friend and team mate on the school's trampoline and tumbling team. Resisting her mother's coaxing to become a cheerleader, the story picks up pace when her mother's old cheerleading friend's son is prompted to ask Mylee to watch him play in his football game. Ty is immediately jealous at the turn of events as rumours begin flying.

Ellie Collins does an outstanding job of combining Greek mythology and peer pressure associated with modern day teenage social media technology in a flawlessly written young adult fantasy story. Rumors begin spreading and relationships are tested when Mylee is pressured by her mother to go watch her best friend's son play in his next game. Mylee finds herself picking up her beautiful mirror, and discovers a beautiful inhabitant that begins talking to her. Young Ms. Collins is an extremely gifted writer that has a passion and skill far beyond her years. Her descriptions of trampoline and tumbling skills are just as spot on as her passion for the Greek gods and goddesses. Mylee In The Mirror is an emotional roller coaster ride that will leave the reader wanting more. Brava!

Mylee In The Mirror by Ellie Collins is a young adult romance with mythical themes and coming-of-age hints. Mylee isn’t comfortable with the situation at home — having to move her grandmother to assisted living, the tension between her parents — and she is afraid the threads that hold her family together are breaking. But then, the most popular boy in high school asks her for a date, something she hasn’t thought about, even faintly. While Sam is charming, there is her secret connection with Aphrodite that she looks to for assurance. Tyler, her best friend and teammate, thinks getting closer to Sam might not be the best idea for her. Can Ty still keep his friendship with Mylee with Sam around? This is a story with relevant lessons for young readers and characters that are filled with life and realism. It also has a strong appeal to fans of Greek mythology.

Ellie Collins’ writing gripped me from the very start — crisp and atmospheric — and I couldn’t help but notice the humor from the very first page. The family dynamics are beautifully and genuinely portrayed to reflect what readers normally encounter in contemporary homes. The relationships between the characters are well thought out and skillfully handled. While the story is engaging and the conflict deftly handled to move the plot forward, the lessons the author weaves into the story interested me the most. Ellie Collins teaches readers to trust in themselves, to reconnect with their deepest desires, and to redefine their worth from who they really are and not what others think of them. Mylee In The Mirror is filled with humor, insight, and characters that are as real as they are interesting. It is a gem for young readers.