Nazi Saboteurs on the Bayou 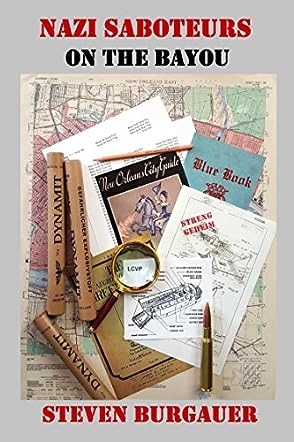 Avid hiker, Eagle Scout, and founder of a mutual fund, Steven Burgauer resides in Florida, where he. writes science fiction and historic fiction. A member of the Society of Midland Authors, Steven is included in The Dictionary of Midwestern Literature, Volume 2 and the ALA’s Librarian’s Guide to Cyborgs, Aliens, and Sorcerers. His "The Road to War: Duty & Drill, Courage & Capture" is based on the journals of an American WWII infantryman who landed at Normandy, was wounded and taken prisoner by the Nazis. Publishers Daily Reviews says of it: Five-plus unequivocal stars . . . an extraordinary read that everyone should enjoy.

His work has been reviewed in many places, including LOCUS, the EUREKA LITERARY MAGAZINE, PUBLISHERS DAILY REVIEWS, MIDWEST BOOK REVIEW, THE BOOK REVIEWERS, BOOKVIRAL, and PROMETHEUS, the journal of the Libertarian Futurist Society.
Of his book Nazi Saboteurs on the Bayou, The Book Reviewers write: “An engaging, slow-burning wartime thriller with an epic feel and a large cast of characters.” Midwest Book Review writes: “In a war that rips apart entire worlds, who can truly be the winner? Add a dash of romance to the intrigue for a solid World War II thriller that’s intricate, frighteningly realistic, and hard to put down.”

When Steven lived in Illinois, the State of Illinois Library included him in a select group of authors invited to the state’s Authors’ Day.

Political intrigue, espionage, and sabotage are aspects of the deadly game that brings together the US intelligence community, a New Orleans Mafia don, exceptional code breakers, and MI6 in a deadly conflict and race in Nazi Saboteurs on the Bayou by Steven Burgauer. The Nazis have conceived a deadly plot to sabotage the production of the Eureka steel-ramped landing crafts built by Higgins Industries. They have discovered a notebook with maps and codes, and they are determined to accomplish their task, taking down anyone who stands in the way. Who will succeed in outwitting or stopping them?

Nazi Saboteurs on the Bayou is a captivating novel that combines history with fiction to offer a delightful reading experience to readers who love well-crafted historical novels. The story features well-imagined and excellently developed characters, a great historical setting with powerful references to World War II. The cast of characters with their specific interests is thorough and it creates the kind of conflict and tension that propel the story forward.

Steven Burgauer seems to have studied the climate of the Second World War intensely because of the verifiable facts that come across in the compelling narrative and, although this is a work of fiction, the reader feels transported into the atmosphere of the war and gets to experience some of its horrors. The writing is perfect and the cultural elements are captured in conversations featuring different languages, something that adds credibility and strength to the narrative and to the dialogues. This is an enjoyable read for fans of historical novels with compelling characters.