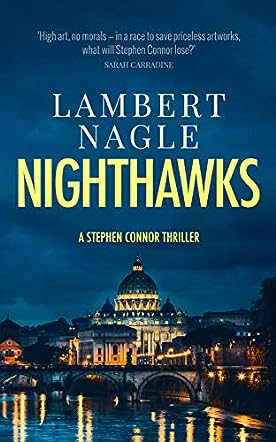 The theft of 12 paintings at the Stewart Gardner Museum in Boston is one of the most daring crimes in modern history, still unsolved to this day. Wouldn’t it make a good idea for a novel? Indeed it does in Lambert Nagle’s Nighthawks. Stephen Connor is a London cop, who receives an ultimatum from his boss to take a transfer to Rome to work with the Carabinieri for the Protection of Cultural Heritage to stop an organized crime ring looting ancient art treasures. Connor did something wrong while on a case and he acts like a broken man while trying to fit in with his new team in Rome. This is the second book in the Stephen Connor thriller series and there is a lot to take in. He must deal with local cop Elisabetta di Mascio and her crew at the Carabinieri while struggling with the language and culture. While investigating the case, there appear many characters with connections to a Mafia boss from the United States who may have taken part in the Gardner Museum heist, and a down and out Irish priest named McCarthy, with a taste for art treasures, who connects with Stephen on a chance meeting. Stephen’s past plays a role in his personal problems. His fiancée, Ginny, comes to Rome for a visit, wanting to end their relationship. This adds to Connor’s angst.

Nighthawks skips along at a fast pace with action in Australia, Rome, Naples, London, and Boston. Stephen and Elisabetta try to piece together clues to the thefts of ancient art while trying to help each other. The reader is teased with a budding romance between the two. The pair deals with a group of characters including the aforementioned Irish priest, who may or may not be telling Stephen the truth, some unctuous and very credible villains, and some pretty brutal henchmen. There are some crooked cops, pickpockets, and gangsters to boot. Mixed in with chase scenes, muggings, and double-cross, our hero, Stephen Connor, seems to be one step behind with his confusion and doubt. However, he slowly gains his mojo back as the story unfolds and he and Elisabetta are set to be there when it counts. The reference to the Stewart Gardner Museum incident plays a large part toward the finale and the descriptions of historical settings and famous works of art give the story an added ambiance to go along with the plot.