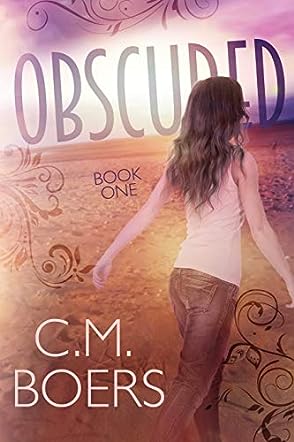 Obscured is the first book in The Obscured Series written by C.M. Boers. Still reeling from her parents’ recent divorce, sixteen-year-old Abby Martin is plagued by nightmares of the worst kind. Part of her is resentful that her mother chose to move them from Los Angeles to Arizona, far away from Abby’s father, but it is not long before she is grateful, having made some amazing new friends at Kinsley High School. When Pete Denali catches her eye, she is flattered by the sudden attention and flirtatious advances of the footballer which come her way, but is puzzled when a second boy, Eli, warns her to stay away from Pete. With rumors that Pete had murdered somebody and had a vicious temper, Abby promises Eli that she will be careful, but when Eli seems to be just seconds away every time she is in danger, Abby soon becomes afraid that Eli is her stalker. After Abby witnesses Pete’s extreme temper first-hand, she quickly turns to Eli for help, only to uncover a supernatural world which she never knew existed. With one person seemingly having all of the power and control in her life, Abby needs to trust her instincts (which have let her down so many times), hoping that they will keep the people she loves safe from the terrifying dangers of her new world.

After starting at a slow and steady pace, C.M. Boers’ tale of a typical sixteen-year-old girl suddenly takes its foot off the brakes. New characters are introduced into the fray, incredible friendships are forged, and unbreakable bonds are made. I was particularly amused at watching Abby’s recently divorced parents acting like children during a one-week visit under the same roof, with jealousies aflame. It always amazes me how romance of any kind can change a person’s personality, bringing out the beast in us all, and transforming us from hot to cold in a flash. Abby’s relationships with Pete and Eli are no different, with emotions such as friendship, lust, anger and hate on supercharge. When supernatural elements were introduced, all traces of slow, steady and calm had vanished, leaving the reader speeding down an emotional highway filled with twists and turns that get your head spinning. I very much enjoyed Obscured and am excited to learn that two more books in the series have been released. With C.M. Boers’ unique and entertaining writing style, giving an incredible story from a first person perspective, I fully recommend Obscured to fans of the Young Adult genre, blending action, drama, fun and suspense in this paranormal romance.