Oink and Gobble and the Men in Black 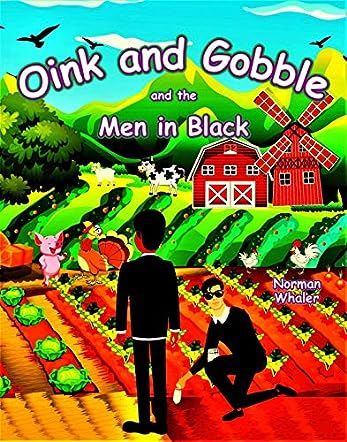 Norman Whaler is a multi-award winner from Grosse Pointe, MI, USA. With over 120 awards for his children's books, Norman focuses on positive messages, some on serious subjects and some that are just about fun. He is a member of SCBWI (Society of Children's Book Writers and Illustrators), IAN, and IBPA. His website is normanwhaler.com.

I very much enjoyed the humor in this delightfully entertaining tale. The ironic ending had me both laughing and in shock, which does not happen very often. I believe it is the talented Norman Whaler’s writing style which kept me immersed in the story from beginning to end, with each turn of the page leaving me wondering which exciting details were about to be discovered next. Oink and Gobble definitely make such an unlikely pairing of best friends, but their detective skills are quite hilarious, as is their ability to blend in with the background. Readers will find themselves turning each page with a smile and laughter as Oink and Gobble get themselves into deeper and deeper trouble with the farm’s visiting duo. I highly recommend Oink and Gobble and the Men in Black for younger audiences aged from 5-12, not only as a book to be read to them, but it would also be ideal as a book for beginners to practice fun reading skills on their own.

Oink and Gobble and the Men in Black is an animal adventure picture book for children written by Norman Whaler and illustrated by Mohammad Shayan. Oink and Gobble are about as opposite as two friends could be, but they always seem to bring out the best in each other. The calm and reflective Gobble had so much fun spending time with her imaginative and sometimes silly friend who even got excited about being able to shoot water through his nose. And while the rest of the farm animals thought that Oink was just plain nutty, Gobble loved to listen to his conspiracy theories and ruminations about aliens, Bigfoot and the Loch Ness Monster. One day, while they were out playing, Gobble and Oink heard strange voices and, peering through the farmyard fence, noticed that two unfamiliar men were talking with the farmer. Oink could not believe his eyes -- they were dressed all in black. Could they really be the Men in Black? Gobble tried to calm him down, but then she decided to go along as Oink began to investigate the appearance of these strangers.

Oink and Gobble and the Men in Black celebrates the imagination that some of us are lucky enough to be born with. Like Gobble, the second best thing is to be best friends with some who does have it. Oink’s instant impression about the strange men in black seems crazy even to his best friend, but she’s there checking out the strangers right alongside him. I enjoyed getting to know the two friends and, like Oink, prefer to think there are things out there that we really don’t understand yet. So, the adventure of the Men in Black proved to be entertaining and fun. Mohammad Shayan’s illustrations brilliantly bring that amazing farm in Little Bottom to life. The number and variety of animals on each panel present a perfect opportunity for counting exercises, and the colorful farm scenes are a joy to spend time admiring. Who are those men in black, and what are they doing at the farm? Young readers will love finding out the answers to these mysteries. Oink and Gobble and the Men in Black is most highly recommended.

Oink and Gobble and the Men in Black by Norman Whaler chronicles the delightful adventures of two unusual friends. Oink, a fun and delightful pig, is always looking for ways to amuse himself and his best friend, Gobble, a level-headed turkey. Unlike other animals on the farm, Gobble finds Oink’s absurd ideas funny and entertaining but even she finds them too wild at times. One day, some strange men appear wearing black suits and dark sunglasses at the farm. As they converse with the farmer, Oink and Gobble cannot help staring as they try to think of any reason that the men could have come to the farm. Oink, always the adventurous one, suggests to Gobble they follow the men around. As they watch them, Gobble dismisses Oink’s bizarre claims, but could he be right this time?

Oink and Gobble are two different main characters not only because one is a pig and the other a turkey, but also because of their different personalities. Still, they share a very close bond and where one is willing to go, the other will definitely follow. Their unusual friendship forms the basis of this amazing and intriguing tale. Oink’s suggestions are funny and even I couldn’t blame Gobble for ignoring or objecting to them. The illustrations are colorful and comical and they also help tell the story. The book contains a surprising twist which makes it even more captivating. Oink and Gobble and the Men in Black by Norman Whaler is a fun and engaging read especially for readers who have an appreciation for adventure.