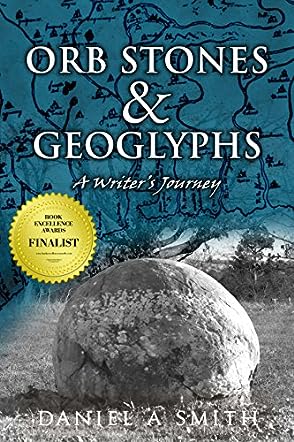 Daniel A. Smith’s short memoir, Orb Stones and Geoglyphs: A Writer's Journey, is an exploration of one man’s drive to create, and the inspirations he found to do so. Smith admits to a favouring of mathematics and hard science over writing, finding the latter confusing in its more chaotic nature. Writing and language do have order and rules, but there's far greater fluidity and change. It certainly doesn't help that he is dyslexic. As a young man with a degree in physics, Smith began work as a soundman, weaving artistry with sound waves to help create amazing concerts. He was one of the 'men behind the curtain’. His discussion of rock and roll music seamlessly segues into a discussion of a trip he took with his wife, stumbling upon a small town where giant, near perfect round stones were everywhere. Clusters rested in fields and graced entryways and parking areas where people had moved them. He would go on to search for the mysterious orb stones all through Arkansas, eventually sparking a story fragment.

As Smith’s travels and research carry him deeper into the past, he shares with us his thoughts regarding the lost past of indigenous cultures and insights from his research. I found the conquistador information fascinating. I love how, for Smith, these orb stones became his guides, paving the way to finding the key to the past, to meet the hermit at the sick girl’s grave. Here Smith echoed something that I, as a writer myself, fully believe. We are biblioanthropologists, blessed with the key, or keys, to different places. We share not only places that exist only in our own heads, but out there, somewhere beyond the blurred borders of our here and now. For Smith, his key is to our past. He stepped through and found Tatianto and Manaha, who have stories to share. I know, too, the fierce feeling of needing to write in the moment. It's an all-consuming need, to get it all down on paper before the connection fades. Orb Stones and Geoglyphs: A Writer's Journey is a highly engaging little read. It is one man's journey towards learning to be a bridge and a keyholder. A chronicler. A biblioanthropologist. Highly recommended for all the beginner biblioanthropologists out there to help ease doubts and learn to trust the process.