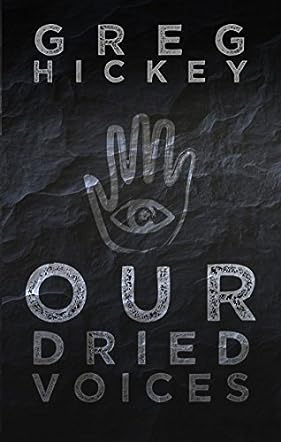 Greg Hickey started writing his first novel the summer after he finished seventh grade. He didn't get very far because he quickly realized he preferred playing outside with his friends.

Eight years later, he began to find a better balance between writing and life. He wrote the early drafts of his first screenplay Vita during his last two years of college. Vita went on to win an Honorable Mention award in the 2010 Los Angeles Movie Awards script competition and was named a finalist in the 2011 Sacramento International Film Festival.

After college, he spent a year in Sundsvall, Sweden and Cape Town, South Africa, playing and coaching for local baseball teams and penning his first novel, Our Dried Voices. That novel was published in 2014 and was a finalist for Foreword Reviews' INDIES Science Fiction Book of the Year Award.

Today, he still loves sharing stories while staying busy with the other facets of his life. He is a forensic scientist by day and endurance athlete and author by nights, lunches, weekends and any other spare moments. After his post-college travels, he once again lives in his hometown of Chicago with his wife, Lindsay.

By 2189, cancer, AIDS and a host of other fatal diseases are no longer life-threatening. However, within this time span, two more World Wars have ravaged humanity. Global warming has reached unprecedented levels. Considering these circumstances, a diverse group of wealthy investors concludes that a new planet, capable of sustaining life, needs to be found. In 2092, an Earth-like planet, named Pearl, is discovered sixteen light years ahead of Earth. A spaceship carrying thousands of people finally reaches Pearl in 2235, ninety years after its launch. Hundreds of years later, the current human population settled in Pearl are simple beings—the result of living in a Utopian colony where every want is satisfied automatically. As a result, humans no longer need to think or work. However, for the first time since their existence on Pearl, a series of machine malfunctions threatens to engulf the colony in chaos. It’s up to a young man, Samuel, to fix these malfunctions and save the colony. He soon discovers these malfunctions are deliberate. He must find out why this is happening, and who is behind it?

Our Dried Voices by Greg Hickey is a unique science fiction-cum-dystopian novel. While most of the novels in these genres either envision an advanced human civilization or a post-apocalyptic situation where only a handful of humans remain, this novel works on just the opposite concepts. Here the machines are advanced, but the humans are half-witted creatures only focused on their primal needs, and they are thriving. These result in a fresh plot. Hickey slowly builds suspense and soon shows how this simplicity can prove disastrous. The world-building in Our Dried Voices is fantastic. The description of the colony, the machines, the residents of the colony, how the colony came into existence – everything is explained without boring the reader. There is no information dump; neither is the information revealed all at once. Everything is made clear in due time which keeps the mystery intact. Hickey’s eye for detail is admirable, which is reflected in the chronology of events. Further, he has described sunrise and sunset in a hundred different ways, all of which are beautiful.

There are very few dialogues here (befitting the plot). The characters are underdeveloped (again befitting the plot). Amongst them, Samuel shines as a radiant star. With the growing complexity of the malfunctions, Samuel gradually evolves from one of the residents of the colony into being their savior. Necessity is the mother of invention is this novel’s greatest arc. The ending was predictable; however, Hickey did a great job of steering me into the climax. Dystopian lovers should give Greg Hickey’s Our Dried Voices a read. This may become their favorite book of the year.