Keeper of the Hourglass Another Time in a Vacuum Living on A Smile Crisis In the West 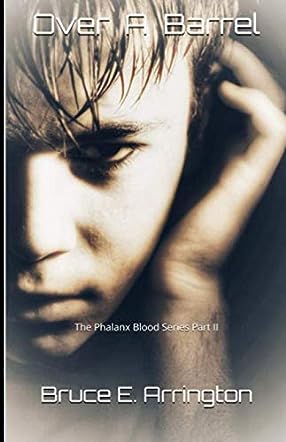 Over A Barrel: The Phalanx Blood Series, Part 2 is a young adult thriller novella written by Bruce E. Arrington. Time usually seems to go much too slowly when you’re sixteen, but for Bernard the last ten weeks or so had flown by with nightmarish speed. It all started with him agreeing to his parents’ request to donate blood for his birthday, in exchange for some very cool gear, but that simple act instantly morphed into a crazed media event when his blood was discovered to cure cancer -- instantly and irrevocably. And while he was able to sign a lucrative and manageable contract with one pharmaceutical company, he found himself kidnapped and held as an involuntary blood bank for five weeks. Bernard would still be there if his three friends hadn’t figured out how to rescue him and helped set him up in a temporary shelter on campus. He even has a tutor who comes and teaches him every weekday. Bernard has a feeling that there’s something off about that tutor, however, especially since he made a study of Bernard’s tiny apartment -- ostensibly to find out how large it was. When his friend’s father comes by, with talk about some friends who urgently need Bernard’s blood, Bernard begins to question just how safe he really is.

Bruce E. Arrington’s young adult thriller novella, Over A Barrel: The Phalanx Blood Series, Part 2, continues the story of the young man whose blood cures cancer as he tries to evade the big pharma sharks that have been circling around him. Arrington’s Bernard is a marvelous character who somehow has managed to maintain his wry sense of humor, albeit tempered by circumstance with a hefty dose of skepticism. I enjoyed the first part of this series, Kidnapped, and was pleased to see that Arrington’s sequel maintains the same blend of taut thriller and edgy humor that made the first book work so well. The plot is fast-paced, and the villains are as dark and despicable as anyone could want. What’s next for Bernard? I’m waiting to find out. Over A Barrel: The Phalanx Blood Series, Part 2 is most highly recommended.