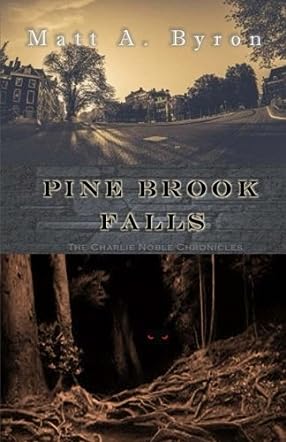 I live in Southern California. I am the Author of What Eye See and Pine Brook Falls, the Charlie Noble Chronicles book 1, I am an avid reader of authors such as Stephen King, Dean Koontz, John Sanford, and more.

I wrote short stories when I was younger and took an interest in Thrillers, Paranormal, Suspense, Fantasy and Mystery.

I am also a big sports fan following Baseball, Football, and Hockey.

In addition to writing and reading, I also manage the training of emergency dispatchers. I design the curriculum and oversee the day to day operations of the training center.

Pine Brook Falls: The Charlie Noble Chronicles is a supernatural mystery novel written by Matt A. Byron. It's been ten years since Charlie and his mom left Pine Brook Falls for Los Angeles, and he never really expected to go back there. His father was a drunkard who became abusive to his wife when he was drinking. The divorce came as a big relief for ten-year-old Charlie and his mom, but his sister Becky, who was seven years older, chose to stay with, and watch out for, their dad. Over the years, he and Becky maintained a close relationship with their frequent correspondence and her occasional visits to them in Southern California. Now, however, he was driving up the Northern California coast because he hadn't heard from her in a week. She didn't pick up his phone calls or reply to emails, and her recent correspondence had gotten very strange. Her last text had said that unbelievable things were happening, but that he shouldn't worry about her. The problem was, he couldn't help but worry, and he was determined to help her out of whatever situation she happened to be in. Charlie Noble knew that the little Northern California town he had grown up in would be different, but he wasn't prepared to cope with the ghost town he drove through on his way to Becky's house. Not a person was out, and it seemed as though the air itself was hushed.

In Matt A. Bryon's paranormal mystery novel, Pine Brook Falls: The Charlie Noble Chronicles, his main character refers to Rod Serling's Twilight Zone series, and, indeed, I felt as though I were travelling with this very concerned brother into something strange, unsettling and not a little frightening. Byron's tale is haunting and suspenseful with rich atmospheric touches imparted by the Northern California wilderness that's long been reputed to be the home of Bigfoot and other strange creatures. Charlie is the consummate main character, who's somewhat horrified to find himself challenging a rather aggressive Sheriff, who has a penchant for keeping his hand hovering over his holster, and trying to find out just who he can trust. Pine Brook Falls offers the reader a cunning mix of genres. There's plenty to thrill the horror and suspense reader as well as those who enjoy paranormal elements in their mystery reads, but there’s also a healthy dose of psychological thriller in this work as Charlie blindly navigates his way through strange people and an even stranger being in the woods. Pine Brook Falls: The Charlie Noble Chronicles is a grand read, and it's most highly recommended.