A Witch Steps into My Office 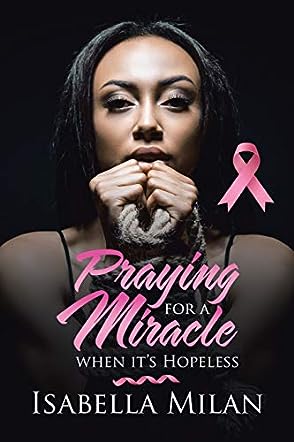 Isabella Milan is from the San Francisco Bay Area and educated in Southern California. She completed three degrees, including an MS in Sports Psychology, an MBA and a Doctoral Candidate in Clinical Psychology. Due to her life-threatening cancer, she underwent two mastectomies and reconstruction surgeries during 2004-2005. In 2007, Isabella encountered Stage 4 Breast Cancer metastasis to her brain, leading to another surgery. In 2008, she was diagnosed with Hydrocephalus. A shunt was surgically inserted into her brain to drain the water in her brain to her bladder. Isabella has looked breast cancer and other illnesses in the face and survived their wrath. Her motto: Keep Fighting! Never Give Up! God Has You!! She is a 15-year Stage 4 Breast Cancer Survivor, resides in Texas, and is currently enjoying seeing her son experience college life. A site she thought she would never survive to see.

Praying For a Miracle When It’s Hopeless by Isabella Milan is a gut-wrenching, no-holds-barred account of author Milan’s life when she was facing the twin traumas of a nasty, custody-battle-filled divorce at the same time as she was trying to deal with what is usually seen as a terminal diagnosis – Stage 4 Breast Cancer. Isabella, like all little girls, had dreamed of marrying and loving a true prince and she genuinely believed she had found that man. What began as a beautiful, loving marriage, however, quickly deteriorated into her worst nightmare. Having suffered from early breast cancer and taken radical action with a double mastectomy, the author was stunned, shocked and frightened to discover later that she now had Stage 4 Breast Cancer – a death sentence to be sure, she assumed. Deserted by her husband and sent to live with her mother on the other side of the country, Milan struggled to cope with rejection and disease. Yet, despite the odds, the author will find the strength, the will and the determination to fight back, to beat the odds and to regain her life.

This is a powerful story of one woman’s desire and determination to defeat seemingly overwhelming odds. Praying For a Miracle When It’s Hopeless will tug hard on any reader’s heartstrings but what comes through author Isabella Milan’s tale of courage is her overwhelming belief in herself, her faith, and her desire to reunite with the son that had been so cruelly snatched away from her. As I read this book, I couldn’t help but marvel at this woman’s matter-of-fact presentation of the facts on breast cancer recovery and the likelihood of death. She shied away from nothing – nothing was sacrosanct or taboo to discuss, which made this book so real and so important, especially for those who suffer from any pernicious illness or trauma. Divided into two clear halves, the first half of the book discusses Milan’s personal trauma and experience, with the second half dedicated to suggestions and techniques for dealing with pain, illness, and people’s expectations. It was this well-roundedness of the story that made it so appealing and so memorable to me, as a reader. For me, a highlight was the recounting of a friend’s stunned reactions to seeing Milan alive and well years after having written her off as a person about to die due to her Stage 4 “death sentence”. Milan was having none of that and as she said, although there’s no cure for Stage 4, there is a way through it and beyond. This is an inspirational tale that is well worth the read even if you are hale and healthy.

Praying For A Miracle When It's Hopeless is a work of non-fiction in the true life experience, spiritual and inspirational sub-genres, and was penned by Isabella Milan. Recommended for those who enjoy tales of hardship that have triumphant endings, this work recounts the incredible real-life struggles of the author in both her medical and personal life. Having struggled with breast cancer over several years, Isabella received a grim diagnosis of Stage 4 cancer in the year 2007. To add to her devastation, her husband abandoned her at this point, and filed for divorce and to take custody of her young son. What results is an incredible tale of strength and faith, even against the most impossible odds.

Author Isabella Milan shares her life with her readership in a raw and honest fashion, the pure emotion of which can sometimes be hard to take. But, reassured as we are by the writer in the spirit of God, the power of prayer and her own incredible strength of character, we go on this amazing journey through darkness and manage to find the light. Milan writes like a guide who knows her way, comforting us through the very real fears which she once faced, and counseling us on how to cope with the things which we can control and those which we cannot. Overall, Praying For A Miracle When It's Hopeless is a highly recommended read for anyone who has or is experiencing similar struggles. Milan shines a light on the power of hope and survival.

Praying for a Miracle When It's Hopeless by Isabella Milan tells her own story. It details how she fell in love with her prince-turned-frog husband and the ensuing divorce and custody battle. In the midst of this struggle, Isabella Milan was diagnosed with ductal carcinoma in situ - breast cancer stage zero. Despite a mastectomy, doctors found breast cancer on the left side, resulting in more chemotherapy. Yet again, treatment failed and a new diagnosis came in - stage four breast cancer with metastasis to the brain. While Isabella Milan underwent further treatment, her husband decided for-better-or-worse was no longer applicable and sent her to live with other family members, away from her son. However, with help she recovered and went on to fight for her son and her life. Thankfully, she persevered and has come to share her story, tips, and recommendations surrounding one of life's greatest difficulties.

I've heard great things about Praying for a Miracle When It's Hopeless and was thrilled to get my hands on it. As someone who has multiple family and friends suffering from something similar, it was unique to see from their perspective and how they may feel. Isabella Milan walks the reader through her story and, at times, she made me visualize her life and feel for her in so many ways. I felt her fear, hurt, anger, hope, and happiness as she went through these trials. Truly an amazing, heartfelt story and her strength is amazing. I also quite like how the author went through the disease as well as provided tips and recommendations from professionals on how to adapt during such a rocky period.

A commendable story about the triumph of the human spirit, Praying for a Miracle When It’s Hopeless by Isabella Milan takes us on her journey in her fight against breast cancer with metastasis to her brain. Further stretching her mental, emotional, spiritual, and physical limits was when she had to go through a turbulent divorce. In her own words during the process of their marital dissolution: “. . . he made it clear to me that he ‘made’ me and that I would be nothing without him.” Then aside from contending with breast cancer and divorce, she faced an even greater fight in restoring her parental rights in the custody of her son. In the middle of facing these challenges, she had no idea that depression had taken over. Though feeling abandoned, she managed to muster the courage to wield her faith and the love of family and friends as her driving forces to weather such insurmountable challenges that even the biblical Job would find too much.

Cancer changes you. Top it with divorce and a fight for child custody and it changes you even further. Ms. Milan realizes these changes and perhaps it still leaves her reeling whenever she looks back. What’s admirable and inspiring is that she reaches the epiphany of her new normality and the awareness that there will be people and Providence on her new threshold. Going through a serious illness while at the same time navigating one’s way through a failing marriage can exacerbate stress and feelings of hopelessness. This is why Praying for a Miracle When It’s Hopeless renews your faith in the human spirit. As Ms. Milan faces her reality and mortality, she comes into sharp focus on the things that truly matter to her.