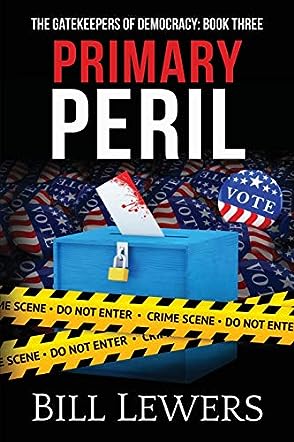 While Bill Lewers has been a political junkie for as long as he can remember, it was only when he started serving as an election officer that he began to realize the special role these one-day volunteers have in ensuring that Election Day plays out as it should.

When he started to write, it seemed only natural that he should reflect on his own Election Day experiences, which he did in "A Voter’s Journey." But he also wanted to write fiction; to allow his imagination to build on the things he had seen to create stories that would connect with readers, both inside and outside the election administration community.

The result is the Gatekeepers of Democracy series, which is dedicated to the women and men who serve on Election Day. While the primary purpose of these books is to entertain, they hopefully do so in a way that mirrors the respect he has for the process and the people who make it work.

Right now the series consists of three volumes, "The Gatekeepers of Democracy," "November Third," and the recently released, "Primary Peril." In the meantime, Bill would encourage anyone who finds these books enjoyable, to consider signing up with their local office of elections. Election Day service is a rich and rewarding experience. Perhaps you will see things that will inspire you to add to the wide-open genre of “election officer fiction.”

Political intrigue, drama, crime, and mystery are elements that make the third book in The Gatekeepers of Democracy series a compelling read. In Primary Peril by Bill Lewers, readers encounter compelling characters in a run for a political position that quickly transforms into a vicious game, involving murder and suspense that grows on each page. Republican Jennifer Haley and Democrat Emily Weston compete for the vacancy in the Virginia’s State Senate but for a mere eleven votes. It will be twelve months before a rematch takes place, but then when a prominent political figure dies in mysterious circumstances, the game changes. Allegations, suspicions, and accusations mount, and while many people think this is an accident, the police believe it is more than that. Can they unveil the face of the killer and change the tense political atmosphere?

Bill Lewers is not just a master storyteller but also one who infuses realism and humanity into the writing, showing a keen understanding of the political game and the machinations that accompany it. The crisp writing and the excellent political setting make readers feel as though they are watching an unfolding political drama. The characters are elaborately developed, likeable, and real. The conflict is huge, a semblance of what readers must have witnessed in the vicious campaign for the White House. In the heart of the book is the question: how far will some people go to gain political power? The stabbings-in-the-back, the trickery, the maneuvers that can turn deadly are just few of the elements that fuel this already deftly crafted, fast paced, and engrossing plot. Primary Peril is a book you can’t put down.

Primary Peril is a work of murder mystery fiction penned by author Bill Lewers, and forms the third book in The Gatekeepers of Democracy series, focusing on the hi-jinks of election offers and their whole administration. In this new instalment to the series, two politicians vie for a place in Virginia’s State Senate, only to be pipped by a mere eleven votes. As they prepare for a rematch, there are primaries to survive, and just as they approach the vote a so-called accident happens to a fellow figure. As questions arise about the nature of the accident, the campaign goes on but becomes more and more entwined with the mysterious events of the other politician’s death.

For someone who knows very little about the American voting system, I learned a lot as well as enjoying the action when reading Primary Peril. The cast of characters is not fully rounded out, making this a much more plot-driven tale than a character study, but the real star of the piece is the system itself and how elections come together despite the chaos happening all the time in the world around them. The murder mystery element was well told, accurately using the media to hype up the issues but also unveiling more hidden depths, and author Bill Lewers writes dialogue extremely well to convey the differing opinions in the storm of information. Overall, I would certainly recommend Primary Peril as a thrilling and highly original work set in an under-represented area of politics.

Primary Peril is the third book in The Gatekeepers of Democracy series by Bill Lewers, featuring murder, political intrigue, and themes that readers will find interesting. What does it take to win the elections for a vacancy in Virginia’s State Senate? Two prominent characters are on stage, Republican Jennifer Haley and Democrat Emily Weston, and they are on a very tight race separated by just eleven votes. Now they have to wait twelve months to face each other again, and there is even more work for each candidate to do. However, something tragic suddenly happens that changes everything — a prominent political personality dies in unclear circumstances. While some rule it an accident, the police believes foul play is involved. Fever is high, suspicion is growing, and uncertainty follows the characters as the day of the Primaries looms ahead. Can the culprit be apprehended and what can possibly go wrong again in a political climate that is tense already?

Bill Lewers writes well and the grace in the prose hits the reader right from the very first page of the narrative. I enjoy it when an author makes me visualize the action, but most importantly when they create strong images in my imagination and Lewers does just that. From the very beginning he pays attention to small details, elements of the setting like the beautiful sunny days that occur in late April and “the dirty warehouse parking lot, where county trucks were parked every which way.” But how the setting reflects the mood and thoughts of the characters is another element that reinforces the realism infused into the story. Primary Peril is the third book in the series and the first I have read by this author, but it makes me want to read more of his books — thanks to the well developed characters, the well-imagined and skillfully accomplished plot, and the exciting prose. A work of great entertainment.