From Sore Soles to a Soaring Soul

by Blaine A. Rada 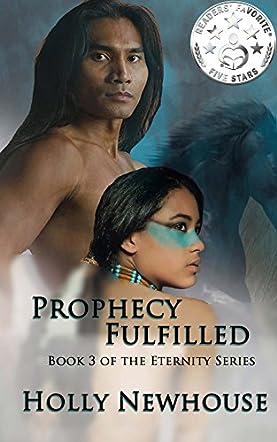 Prophecy Fulfilled: Book 3 of the Eternity Series by Holly Newhouse is a sea of emotions, healing, trauma, war and moments of spiritual awe. Its intense episodes are imbued with sweetness, humour, spirit, joy and tribulation and are written with a candid and deep style. It is a close look at what life may have been like for an Indian nation facing ruthless invaders. The excellent character portrayal will take you deep into the minds of the characters, and elements of telepathy between them further enhance the intrigue surrounding the soul mate connection. Again, Newhouse has diligently depicted the beauty and splendour of the Indian tribes, as well as the suffering and challenges they endured. If you enjoyed the first two books, you will find this third book compelling due to the destiny of the main characters in protecting the Indian nation and in uniting different tribes with a shared purpose.

I especially enjoyed the depiction of "the Great Spirit" since there is a deep spiritual mystery surrounding its involvement in the Indian tribes' lives, and their defence against the invaders. Another aspect which I enjoyed was the marriage of new couple, Shadow Hawk and She who Walks with Wolves. It was a highly involving experience to observe their playful, passionate moments as well as the challenges of trust and understanding which they underwent.

It's difficult to capture every feature of Prophecy Fulfilled and do it justice in a review. Suffice it to say, the revelations, lyrical moments, plot twists and challenges will sustain interest, while the essential female and male heroic spirits weave into these episodes a touching, brave and riveting saga of tribulation, triumph and the struggle to save morale and dignity during the invasion.

Author Holly Newhouse achieves an excellent momentum in this book since she incorporates many moments of excitement, spiritual awe, and pride in such a heavy subject as the invasion of the native Indian lands. In so doing, she enters the core of universal spirituality which sees into each and every being, and also sees the potential and power of the collective whole. Reading this book would make you want to meet the lead characters, who are raw, sincere and charismatic. This book, in addition to the previous two, would make an excellent series of films.

This was an amazing story and quite beautiful, I agree with the reviewer on everything, just a magnificent read!