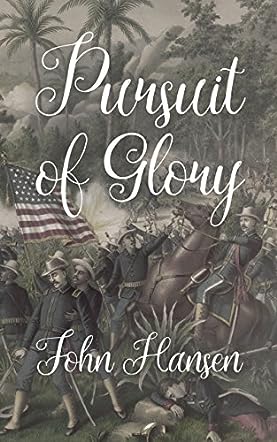 Pursuit of Glory by John Hansen is set in 1898, where 21-year-old Jack Keller has lived his entire life in Gilmore, Idaho, a small mining town near the Montana border. He makes a spontaneous choice to join the First United States Cavalry, otherwise known as the Rough Riders, and go off to the war in Cuba. His disillusionment with the Army and killing will make readers care about every decision that he makes, which will determine his future until he returns from the war.

Apart from some violence and profanity, Pursuit of Glory is a fairly immaculate novel for the general reader, with the Spanish-American War as its background. Jack is a well-drawn protagonist, including his parents, Tom and Annabelle Keller, who lost their daughter, Lucy, in a wagon accident. Tom partly blames Jack’s departure to war as the butterfly effect that caused Lucy’s death. This further solidifies the estrangement between father and son, along with other changes of events, particularly the outcome of his one-time tryst he had with a girl of questionable reputation, Clara Bell. I felt that Jack mostly just got caught up with the dominant circumstances at the time, letting his young mind get the best of him, and still wasn’t sure what he wanted.

On the whole, Hansen has a solid grasp on both the historical and fictional aspects, making this novel an immersive read. The plot has a good pace and following Jack’s self-journey towards adulthood, his duty as a soldier, and his relationship with his family is a substantial read.

Pursuit of Glory by John Hansen is the story of a young man who learnt the true nature of war and the life of a soldier the hard way. Jack Keller, a young man, always had this glorious idea of war and the heroism in being a soldier. His romanticized version of the army and the war got the better of him and he joined the army. Little did he know that one decision was going to change his life and change the way he views things. Before he joined the army and the war in Cuba, he spent one night with a girl, and after that the chain reaction started. The army life and killing people did not suit him, although he tried hard to find the honor and the glory in it. His heart was not in it, nor his mind. But war is dangerous; having a conflicted mind and body can be catastrophic. What will he do when he is so broken inside? Can he serve his country and still hold onto his dreams of glory?

This was a hard novel to read, not because it was not written well, but because it was written with so much heart. I could feel Jack’s pain, his emotional strain, and how miserable he felt when he found out that his romantic notions of bravery and serving his country were not what he thought them to be. This is a beautifully written novel that depicts the true conflict men and women feel when they are serving our country, protecting us while they are breaking inside. Heartfelt and brilliantly written.