If You Ever Lose Hope... 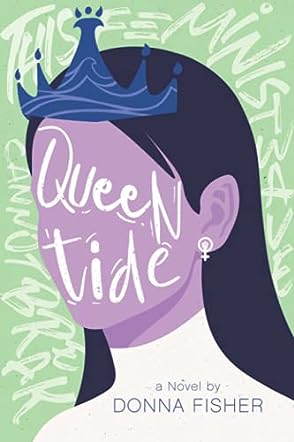 Queentide by Donna Fisher is a fascinating and deeply compelling look at modern patriarchy and the forces of feminism that could rise against and overthrow the ruling paradigm in modern-day Australia. Lilith was the wife of a very successful politician, a rising star in Australian Federal politics. Her husband, however, was a misogynist, a sexist, and had recently displayed a temper that went beyond his usual mental and verbal abuse, straying into physical violence against her. Fearing for her two young girls' safety, Lilith fled the family home. After an encounter with a feminist divorce lawyer, she found herself part of the Queentide community of Bodie, an aging radical feminist whose entire life had been dedicated to promoting the needs of women and helping women in danger from abuse. Following on from the global pandemic and a sharp rise in domestic abuse and suppression of women’s rights in Australia, Lilith finds herself swept up in an audacious plan to elect a federal government in Australia, led and populated primarily by women dedicated to dismantling the patriarchy that for so long had kept women down and in its iron grip. Along with a young aboriginal woman, Kathleen, whose star was ascendant in the Australian Labour Party, these women would seek to change society as we know it and forever “level the playing field” for women.

Some books touch a chord deep within readers and for me, Queentide is such a book. The scenario painted by author Donna Fisher is not only believable but, in many ways, long overdue. What I particularly loved about this story was the constant battle between those who wished to make society a fairer and more just place for all and those who were determined to punish men for their centuries of patriarchy, condescension, and subjugation of women. The battle lines were real and sufficiently blurred for some to lose sight of equality's true objective. I also loved that the author highlighted the two opposing viewpoints between freedom for women and social justice for all the oppressed; the First Nation people of Australia, the LGBTQI community, the disabled, the economically and educationally deprived. This struggle between two competing ideologies within the women’s movement could split the group's entire political aspirations, and I was super impressed with the way the author deftly raised, explained, and dealt with this. This is a gripping read with colorful and exciting characters that will appeal to readers of all stripes, both political and gender-based. I am now a big fan of this author and hope she will grace us soon with more thoughts, ideas, and stories.

Queentide is a work of fiction in the political thriller genre. It is aimed at mature readers and was penned by Donna Fisher. The book follows a subversive political group named Queentide that seeks to stop the authoritarian patriarchy that has been established in their country. Their secret weapons are Kathleen, a candidate in the upcoming election, and a senior minister’s ex-wife with access to dangerous knowledge that can help turn the tide in their favor. But to do this, they will have to overcome a violent men’s rights group that has the backing of the current government and settle the infighting that could kill their movement before it starts.

This is an explosive story set in a world that seems like a nightmare scenario but is also one that sits just on the edge of being possible in the real world. Donna Fisher’s insight into the workings of grassroots political movements is matched by her tasteful yet unflinching discussion of the real-world dangers that spark societal divides. Issues such as racially motivated violence and domestic abuse are present and addressed in the novel. The author demonstrates an immense skill in prose to weave these issues into the narrative without turning the book into a full-blown manifesto. Queentide is a very worthwhile read and uses its fictional context to open a discussion between itself and the reader about the harsh reality that women and people of color have to face in the world today. A highly recommended read for politically minded readers.

What do you say about the matriarch of modern-day feminism, whose daughter died from spousal violence while she was out saving other women? Queentide by Donna Fisher tells the story of Bodie. Her daughter died at the hands of her husband and in the presence of her little granddaughter, Insley. This tragedy radicalized Insley and made Bodie intensify her feminist freedom movement. Unfortunately, things weren’t shaping up. More laws sprang up daily to oppress women in their homes, at work, on the streets, and everywhere. It was time to upgrade the movement into a political party strong enough to run the government. A female Prime Minister and an all-women government must emerge, but everyone has agendas. From Kathleen to Lilith and Insley, will what binds them tear them apart?

Overwhelming, intense, captivating, and enlightening are some words to describe Queentide by Donna Fisher. The plot was brilliant with palpable emotions! Donna told a raw and realistic story. It was devoid of inhibitions, featuring formidable and consistent characters. I could relate because equality and safety for women across the board remain valid discussion points in today's world. Unfortunately, the pandemic further widened the gulf on equality and safety for women. Divorces rose to an all-time high while domestic violence, spousal homicide, and female subjugation soared. How can women unshackle themselves? By adjusting the next woman’s crown and banding together to form a force. Nothing can hold back determined women. However, we must strike a balance between feminism and misandry, an egalitarian society, and the quest for dominance so that we don’t become what we fight against. Good job, Donna!