by Floyd Winter and Daniel DiMarzio, Foreword by Randy "The Natural" Couture 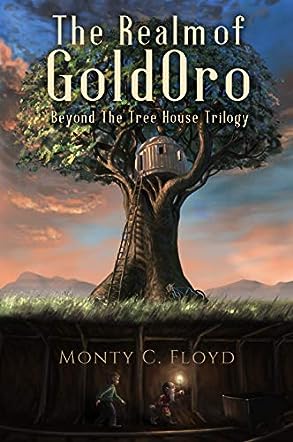 As a multifaceted creative, Monty's content ranges from books, a web series, kid's travel world, to film scripts. He credits his diverse imagination with both travel and living abroad, where he learns stories from other cultures that provide a unique writing perspective. With children's literacy and empowerment near his heart, he is creating a foundation that teaches story telling to Tanzanian girls and dropouts.

Originally from Texas, Monty lives abroad with his wife, three children, and Welsh terrier, Calypso. His romance with his wife is a real-life romantic comedy, one he's been inspired to write. Though his content company, Carltons Creative, has kept him busy for the last five years, he finds his work fulfilling. When he's not working, he's being a loving husband and hands on father with a joy to inspire his children to be strong readers, to chase their dreams, and never to give up!

An ancient book, a mystical and fantastical treehouse, and a slide that leads to a candy shop which masquerades as the entrance to a mysterious and dangerous underground world. Timmy is only eight and he’s endured the pranks of bullies, but he’s not about to back away and run for cover when he discovers a friend in danger. Not only that, but there are a lot of children in danger and Timmy is the only one who can rescue them. So claims the elf-like klom, Aleday, a blind wizard who is set on teaching Timmy his powers and guiding him on a magical journey, one that is required to save all of humanity.

Montgomery C. Floyd’s children’s fantasy novel, Realm of GoldOro, is only the beginning of a long quest which pits good against evil in a magical, fantastic alternate dimension. Much like C.S. Lewis’s Narnia stories, Timmy’s adventures include a little bit of magic and a whole lot of unusual events and happenings. The plot develops with ease, allowing the young reader to learn about Timmy, to feel his remorse over being shut out by the other boys, for being bullied. And then there’s the ‘aw’ factor when Timmy gets his sweet treat after all and enjoys a sojourn in a magical sweet shop before descending, unexpectedly, into a frightening underworld known as GoldOro. The evil force, Bachloss, is the epitome of greed for as a robotic monster set on destroying humanity, he kidnaps and enslaves children to mine his gold, to amass his fortune, to build his impressive empire of riches. Good versus evil, greed versus compassion – it’s a battle to restore the balance of humanity, to save it from evil destruction. This is a powerful story that will keep young readers riveted right to the end, and I'm looking forward to further developments in the next books in the series. A fantastical read!