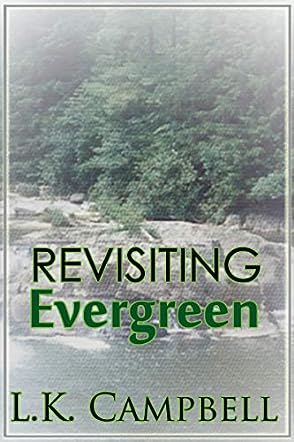 L.K. Campbell has been writing for most of her life. Her professional writing career began with a weekly newspaper column for her hometown newspaper. She began writing fiction in her early twenties, choosing the romance genre because she enjoyed reading books by Victoria Holt as well as the Harlequin and Silhouette lines. In recent years, she’s become addicted to cozy murder mysteries and reads them in her spare time.
Since 2009, she has been formatting e-books for “indie” authors and for two publishers as her full-time business, LK E-Book Formatting Service.
She still lives in her hometown with her husband of twenty years. They enjoy taking trips to the N.C. mountains and drives on the Blue Ridge Parkway.

Stephanie Perry and her family have been invited to revisit Evergreen, the property once owned by Stephanie’s father before he had sold it to Leslie Miller, deceased aunt of the current owner, Kristy. An art studio had been found hidden away in the house, along with several paintings that had belonged Stephen Dickerson, Stephanie’s great-uncle, an artist who had been killed in the war. Kristy and her husband have decided to set up the Stephen Dickerson Memorial Scholarship in honor of Stephen Dickerson and the entire family has been invited for the ceremony. There’s only one problem – Stephanie and her husband, Neal, are no longer together but she asks Neal to accompany her to Evergreen so that her family won’t suspect there’s anything wrong between them. However, once they arrive, Stephanie is jumpy and nervous and things seem to get a lot worse, especially when the news comes on. Neal realizes there’s something deeply troubling Stephanie that goes far beyond anything he’s done in Revisiting Evergreen...

Author L.K. Campbell does a wonderful job in conveying the comfort, closeness and love that are the backbone of Stephanie’s family in Revisiting Evergreen. The parents squabble with each other and with their children, yet there is no mistaking the love that is the driving force behind their relationship. Stephanie and Neal, the wounded protagonists in Campbell’s tale, find the strength to cope at Evergreen. Neal, who’s as close to a perfect husband as one is likely to find between the pages of a book, finds solace in confiding in Stephanie’s brother, a doctor. The author also does a great job in conveying the sense that there is something mysterious, something inexplicable happening at Evergreen and, ironically enough, the only ones apparently in the know are Stephanie’s two young nieces.

Revisiting Evergreen, the third installment of the Evergreen Series by L.K. Campbell, is a lovely paranormal romance that ticks a lot of different boxes and will be sure to appeal to a wide readership. It's a well-written novel that has something for everyone - tasty little morsels of inexplicable intrigue for paranormal lovers and a nice little love story, all rolled into one.