This is How You Vagina 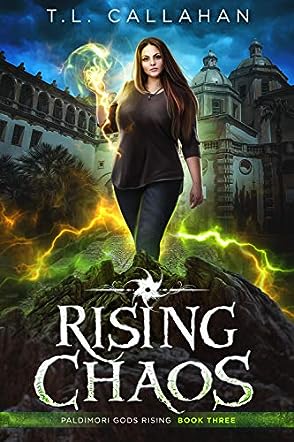 In T.L. Callahan's Rising Chaos, Lia Davis had known things would be expected of her as Bennett's bond-mate, but when he whisked her away to his home she realized just how much was expected from her. Raised with no knowledge of their people, Lia finds herself under the merciless regime of Bennett's Arxhai, Selene, as she tries to shape her into the very image of the Kyrion's mother. Resentment flies high as everyone regards her with suspicion and the power she holds wreaks havoc. She must not only learn her place but complete the task expected from her as Chaos' Chosen. But a mysterious voice keeps telling her to leave, the clock is ticking, she has a task to perform, a duty to uphold, and a role to learn, but can she do it? One thing is certain, she is living up to her title as Chaos' Chosen, as chaos follows on her heels wherever she goes.

Rising Chaos is book 3 in T.L. Callahan's Paldimori Gods Rising Series. Written from Lia's first-person perspective, you are given a front seat to her trials, tribulations, and doubts. Frustration and tempers run high as Lia tries to gain control over her wild powers and be shaped into the figure she needs to become to sit beside Bennett. But at every turn, she is breaking laws, fumbling tasks, or being disrespectful. I enjoyed how Lia held on to trust issues spurred by actions in the previous books and was constantly questioning motives and whether she was trusting the right people. Action, chaos, challenges, and deceptions drive the character-driven plot as Lia tries to become the person she is expected to be, but withheld information, secrets, and past trauma threaten her control. I found Lia to be well-developed. There is a lot to this plot with ancient prophecies, houses, and conflict, and I feel someone who has already read the previous books would have a fuller feel for the situations unfolding and the characters. A strong fantasy with amazing scenes, and an unfolding drama that will get you hooked and eager to know what came before and what will follow.